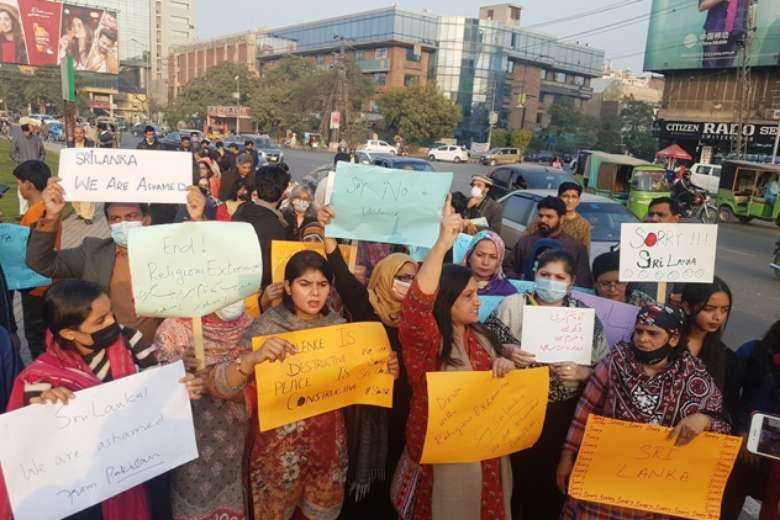 A rally was organized by the Joint Action Committee against Sialkot Killing in Lahore, Pakistan, on Dec. 4 to protest the brutal lynching of a Sri Lankan accused of blasphemy. (Photo: Kamran Chaudhry)

Opinions are divided over the motive behind the brutal lynching of a Sri Lankan factory manager in Pakistan's Punjab province.

Priyantha Diyawadanage, 48, a factory manager in the city of Sialkot, was accused of blasphemy and beaten to death before his body was set alight on Dec. 3.

Pakistani Prime Minister Imran Khan described the incident as a “day of shame” for his country and said more than 100 people have been arrested so far over the incident.

He further announced the Tamgha i Shujaat — the second-highest civil award for bravery bestowed by the Islamic Republic — for Malik Adnan, who reportedly tried to save Kumara from the angry mob.

But Tahir Mehmood Ashrafi, chairman of Pakistan Ulema Council and special aide to the prime minister on religious harmony and the Middle East, claimed in a press statement that the killing of the Sri Lankan national “was not religious but of an administrative nature.”

“The slain factory manager used to ask the factory workers to do work with honesty and diligence,” he explained while denying that the blasphemy law was being misused.

“If anyone does so, action will be taken against him according to law,” Ashrafi warned.

The brutal killing and burning of Priyantha is yet another example of continuing vigilantism by extremists in the name of religion, using the blasphemy law as a tool

The PM’s special aide issued the statement after a joint meeting of clerics, pastors, priests, Hindu and Sikh leaders of Lahore on Dec. 5 which announced Dec. 10 will be observed as a "day of condemnation" to raise public awareness about blasphemy laws.

“Sialkot’s tragic incident will be strongly condemned in all mosques across the country during the Friday congregations and in all churches and places of worship on Sunday,” Ashrafi said.

For decades, the Catholic bishops’ National Commission for Justice and Peace has been criticizing Pakistan's government for refusing to discuss amendments to the blasphemy laws in parliament.

The interfaith Rawadari Tehreek (Movement for Tolerance) has been urging the government to review the laws and initiate a national debate to stop its misuse.

“The brutal killing and burning of Priyantha is yet another example of continuing vigilantism by extremists in the name of religion, using the blasphemy law as a tool,” said its chairman Samson Salamat.

He believed the tragic incident was “the bitter result of the decades-old indoctrination and incitement to violence by extremist outfits who operate with impunity.”

“The state and most of the political parties have been backing such extremist religious outfits and the perpetrators of these horrible crimes draw mass support by fanning hate and brutality,” Salamat added.

Addressing a protest rally in Lahore on Dec. 4, Peter Jacob, the Catholic director of the Centre for Social Justice, challenged the government’s stance on blasphemy laws, saying the ministers don’t analyze the damage caused by the blasphemy laws to the victims.

He felt that merely seeking forgiveness isn’t enough anymore. “Correct your course. Fanatics have been weaponized. Nobody is safe anymore,” he said.