Father John Baptist Tran Quang Truyen is treated in hospital after he was stabbed by a man on April 22. (Photo courtesy of Facebooker Nguyen Ngoc Nam Phong)

An elderly priest and two others from a parish in Vietnam’s Central Highlands have been stabbed by a former prisoner with a history of mental disorders.

Father Thaddeus Vo Xuan Son, a member of Kontum Diocese's communication committee, announced that Father John Baptist Tran Quang Truyen, parish priest of An Khe in Gia Lai province, was severely stabbed in his stomach at his parish house at 11am on April 22 by a local young man.

The priest said the victims were given emergency treatment at the General Hospital in Binh Dinh province. He called on all people to pray for the priest and the catechist.

Father John Nguyen Ngoc Nam Phong said Father Truyen was out of danger but Tung remained in danger due to a deep stab wound.

He said the priest is a mild man who never causes problems to others.

Father Truyen, who was born in 1951 in the northern diocese of Vinh and was ordained a priest for Kontum Diocese in 1994, serves as head of An Khe Deanery.

Nguyen Hung Vy, chairperson of An Khe Town, told reporters that police had detained Tran Trong Ca over the stabbings.

Vy said Ca, 30, drove a van to An Khe church compound where he slightly damaged two cars and stabbed Father Truyen, Tung and an elderly man who was taking drinking water from the parish house. 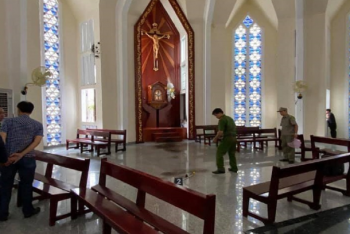 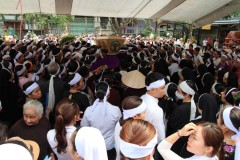 Police said Ca was sentenced to three years in jail in 2016 for wounding other people, while in 2018 he was sent to a hospital in Binh Dinh province for schizophrenia, a serious mental illness.

His dangerous condition recently recurred and he had stopped people on roads and beaten his relatives.

He reportedly only smiled and sang during police questioning.