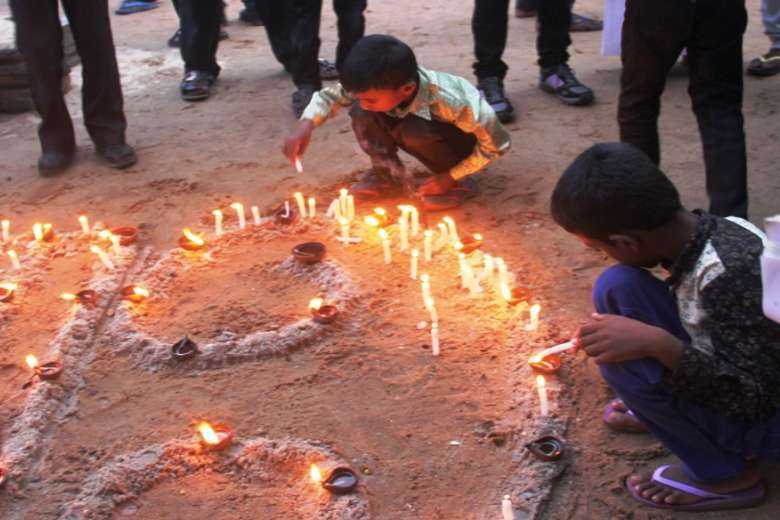 Raj, an activist from Killinochchi, the former administrative city of the Liberation Tigers of Tamil Eelam (LTTE), remembers the relatives and priests who went missing or were killed during the war when he passes some areas.

Tamils have called on the government to build trust among minorities as they struggle to commemorate their loved ones.

"Losing the opportunity to commemorate their loved ones will only exacerbate ethnic divisions and hamper reconciliation efforts," Raj said.

Many critics point out that the government's efforts to move the reconciliation mechanism forward are not enough.

On May 18, 2009, the government declared the end of war with the LTTE, also known as the Tamil Tigers, after killing LTTE leader Velupillai Prabhakaran in Nandikadal lagoon in Mullivaikkal.

The government has been criticized for alleged ongoing rights abuses against Tamils but denies such charges.

The war began in 1983 when some Tamil groups fought to carve out a separate Tamil homeland in the country’s north and east.

According to the UN, the war claimed the lives of at least 40,000 civilians in its final days alone, while other independent reports estimated the number of civilian deaths exceeded 100,000.

The National Peace Council (NPC) said the war continues in the minds of people 12 years after the fighting ended on the battlefields of the north.

"Until there is collective remembrance of loss, there will continue to be a reinforcement of the separation through separate memorializations," said the NPC, an independent organization that works towards a negotiated political solution to the ethnic conflict in Sri Lanka.

"While we advocate the collective memorialization of all who lost their lives in the war, we affirm the need for the government to erect a suitable monument in Mullivaikkal with the people’s participation to enable the people of the north and east to remember and mourn their loved ones who lost their lives at the end of the war," the NPC said in a statement on May 17.

Both sides were accused of serious human rights violations. The government has been criticized for alleged ongoing rights abuses against Tamils but denies such charges.

The NPC said Sri Lanka must demonstrate its capacity to move beyond the thoughts and actions of the past not only out of magnanimity but also out of necessity as a functioning democracy.

"In this time of the Covid pandemic that affects us all in equal measure, regardless of race or creed, we need to recognize that there are ties that bind us as Sri Lankans, which should not be ignored as there have been victims on all sides of the conflict. They all have their right to remember," said the NPC.

"The thwarting of the people’s desire to mourn together is a manifestation of continuing enmities that will be exacerbated until a new path of reconciliation is taken. If democratic spaces are blocked, then the tendency is to seek non-democratic spaces."

At least 10 priests were killed and three went missing during the war, but there is still no justice for them

A Tamil war memorial erected in Mullivaikkal to remember the victims of the final stages of the war was destroyed on May 13.

Another Tamil war memorial at Jaffna University was destroyed by the authorities on Jan. 8. Students and community leaders protested and the monument was erected again in the university premises.

A court has banned all commemoration events of the war dead in Mullivaikkal. On May 18 every year, Tamils mark Remembrance Day when they honor the memory of those who died during the final months of the civil war that was fought from 1983 to 2009.

"Many Tamils have been trying to deal with post-war challenges such as getting military-occupied land released, increasing militarization, looking for disappeared loved ones, economic hardships, finding disappeared members and struggling to resettle in their own lands," said the priest who wished to remain anonymous.

"At least 10 priests were killed and three went missing during the war, but there is still no justice for them."

The resolution added pressure to conduct an independent and credible investigation into alleged war crimes and criticized the erosion of judicial independence, marginalization of minorities and impunity in Sri Lanka.