After a surge in suicides, a campaign is helping the most needy to get vital help with food and cash 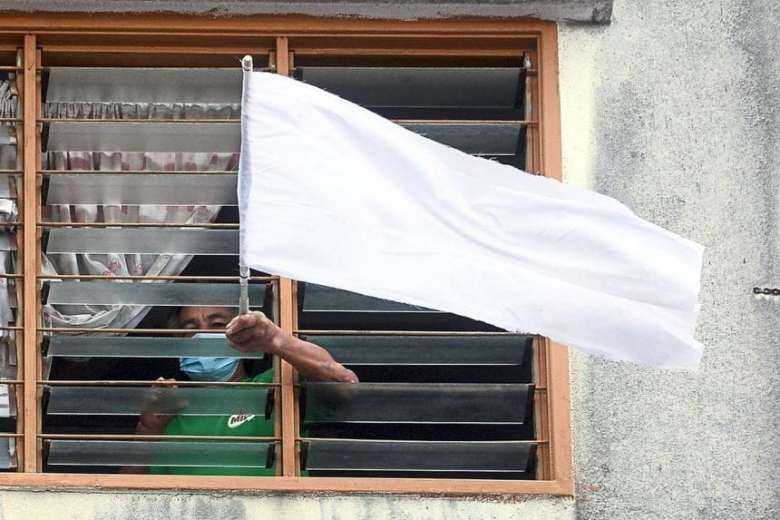 A Malaysian man raises a white flag to seek assistance during the pandemic (Photo: Facebook page of Adrian Maxxan Properties)

Amid huge socioeconomic downturns from the Covid-19 pandemic and ongoing lockdown, more distressed Malaysians have been joining the White Flag movement to seek immediate assistance including food and cash for survival.

The origin of the movement is unknown, but media reports suggest people across the country are raising white flags to signal an individual or a family in a dire situation.

Jambu Nathan Kanagasabai, 64, a resident of Sungai Way New Village in Petaling Jaya, hoisted a white flag on July 1 after he came to know a local retain chain was offering food hampers to needy people.

He has been in a difficult situation with his wife and sister as his income was lost when a goldsmith's shop where he worked as security guard for a monthly salary of 1,300 ringgit (US$312) shut down due to Covid-19 restrictions.

Soon passers-by took notice of the call for help and informed the village committee about it.

"The committee chairman offered my father some cash, but he just needed food because he was segan (ashamed)," his daughter Vani told Channel News Asia.

By now #WhilteFlagCampaign has become a trending topic on Twitter, with Twitter users from Malaysia appealing to citizens for donations to assist hungry and needy people.

Alya The Queen, a Twitter user from Sabah state, provided her bank account details, pictures of volunteers reaching out to needy people and urged people to donate to help 268 families in the Paitan area in desperate conditions.

“Some 268 families are waiting for us to help them. They are reaching out for food aid. The amount to raise is 28,300 ringgit,” Alya posted on July 2.

“My dearest Malaysian friends here, let’s help spread this campaign. If you need to survive ... reach out to the community … Inshallah, someone will help you,” said Twitter user Lemon Mew

Syaf Rezan posted a 14-second video on Twitter on July 3 that shows dozens of white flags on both sides of a road in Sarawak state of Malaysia’s Borneo region.

Some believe the White Flag campaign is a spontaneous response to a recent report that revealed 468 people committed suicide in Malaysia from January to May this year.

In a letter to the editors of news portal Free Malaysia Today, a reader called Wong Ee Lynn noted that most of those who had committed suicide had found themselves “out of savings, lacking a safety net and out of options.”

“The White Flag campaign currently trending on social media to encourage people who are adversely affected by the movement control order and corresponding restrictions on economic activities to seek help should be seen not as a cause of pride but an indictment of the government of the day for its failure to provide assistance and support to the most vulnerable members of our community,” Lynn wrote on July 4.

Malaysia has registered about 779,000 infections and some 5,497 deaths from the pandemic.

In response to a more lethal second wave, authorities have imposed varying degrees of lockdowns in the country since March. From June 1, the country was put under a total lockdown for two weeks, which has since been extended.

The pandemic forced some companies to slash operations and continue with only 60 percent of staff during the lockdowns, causing daily losses of 2 billion ringgit ($40 million) for the Southeast Asian nation, according to government data.

The International Labor Organization warned that the pandemic might trigger a rise in unemployment rate from 5 percent to 8 percent in Malaysia and some 2.4 million Malaysians would become newly poor due to loss of jobs and income.

The Catholic Church in Malaysia has lent a hand to support the needy as well as frontline doctors and health workers.

On June 11, Kuching Archdiocese in Sarawak state delivered personal protective equipment that included 10,000 KN95 face masks and 6,200 medical isolation gowns to Sarawak General Hospital. Donations to the charity came from the faithful and well-wishers of Kuching Archdiocese and the dioceses of Sibu and Miri.

In the third week of June, bishops in Malaysia pledged to contribute 1 million ringgit ($240,000) to the Solidarity Fund initiated by the Tzu Chin Foundation Malaysia.

Catholic dioceses have been reaching out the needy in their respective areas, reported Herald Malaysia, the official publication of Kuala Lumpur Archdiocese.

Teo Kar Im, director of the archdiocesan office of human development in Kuala Lumpur, said many parishes have a food bank to assist those struggling to put food on their tables.

Father Joachim Robert from Catholic charity Caritas Penang noted that many parishes in Penang Diocese have expanded their outreach with groups such as the Ministry of the Poor, Human Development Committee, Society of St. Vincent de Paul, basic ecclesial communities and parish groups to handle such needs.

Hugh Dosen, head of Caritas in Melacaa-Johor Diocese, said parishes have opened food banks or food aid services and Caritas has provided grants to open such food charities in every parish.

Meanwhile, the humanitarian appeal from the White Flag campaign didn’t go down well with everyone, especially with politicians linked to ruling parties in the federal and state governments who viewed it as an anti-government backlash.

Muhammad Sanusi Md Nor, chief minister of Kedah state, reportedly described the campaign as political propaganda and said that no one would get aid for putting up white flags instead of requesting help through phoning disaster control centers. 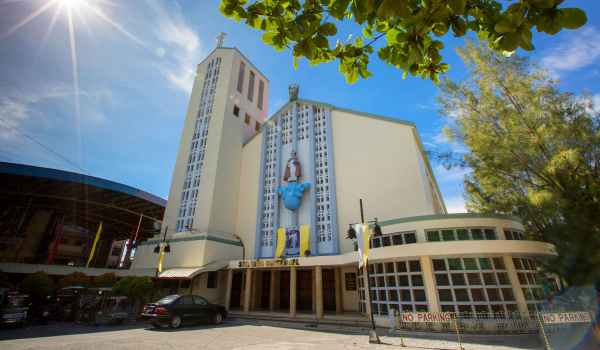