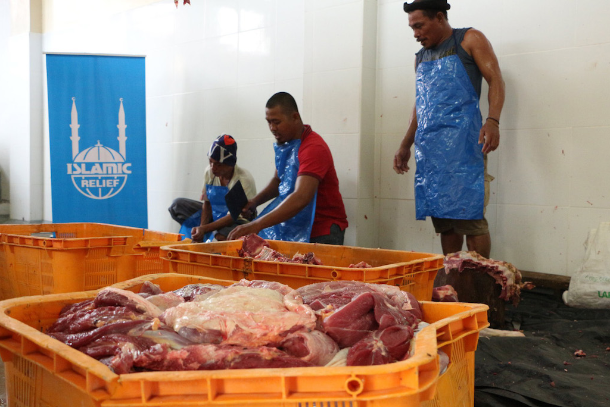 Meat is prepared for distribution to families affected by last year's war in the city of Marawi in the southern Philippines. Islamic Relief led the effort to mark the observance of Eid al-Adha on Aug. 22. (Photo courtesy of Islamic Relief)

An international relief organization distributed meat to displaced families in war-torn Marawi in the southern Philippines to mark the observance of Eid al-Adha or "Feast of the Sacrifice" on Aug. 22.

Islamic Relief Worldwide gave meat to 1,800 families from 44 cows that the organization bought and slaughtered for the occasion.

Maryann Zamora, spokeswoman for the group in the Philippines, said the animals were slaughtered to commemorate the willingness of the Prophet Abraham to sacrifice even his son to God.

At least 3,870 kilograms of meat were distributed to families who continue to live in temporary shelters on the outskirts of Marawi.

Omar Rahaman, head of mission of Islamic Relief in the country, expressed hope that the gift would bring hope to victims of the conflict. "[We also hope] that this will remind everyone to renew their faith in Allah, just like the Prophet Abraham did," he said.

Although most of the displaced families are Muslims, Rahaman said even non-Muslim families displaced by last year's five-month war also received meat.

Catholics in the predominantly Muslim city have vowed to help affected communities through the prelature's social action program.

"We remain one with the people of Marawi in their hopes and desires to begin the long journey toward recovering and rebuilding their city and the essential tasks of healing, reconciliation and peace building," said Bishop Edwin dela Pena of Marawi.

The prelate said Catholics "are here to support and accompany displaced people all the way."

Thousands of people continue to live in temporary shelters around Marawi nine months after government troops drove out Islamic State-inspired fighters from the city. Families who returned to their homes also faced challenges in rebuilding their houses.

Mark Bidder, head of the United Nations Office for the Coordination of Humanitarian Affairs, said it is "still a long road ahead."

He said the "humanitarian consequences" of the conflict are expected to extend beyond 2018, noting that the government still has to complete its rehabilitation and reconstruction plan for the city.

The government earlier announced that about US$1.5 billion is needed for the reconstruction and rehabilitation, which is expected to be completed by the end of 2021.