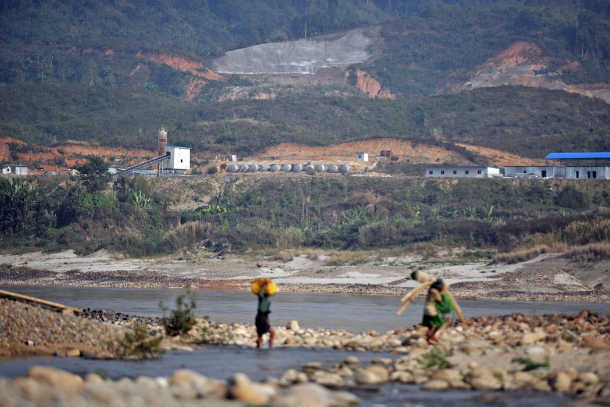 A 2012 file image of part of the controversial Myitsone hydropower project in Kachin State that was to produce electricity for export to China. After a public outcry, construction was halted in 2011. (Photo by AFP)

Kachin villagers displaced by the construction of the suspended Myitsone Dam have called on the government to permanently halt the China-backed project.

Bernadette Ja Hkawng was forced to make way for the megaproject and leave her Tangphre village and relocate elsewhere in 2010. She was one of at least 3,000 people relocated from their ancestral homes for the dam’s construction.

Ja Hkawng told ucanews.com that she is now fearful the controversial project will be restarted due to Chinese pressure on the government.

Ja Hkawng, a Catholic, said she was concerned by a recent Chinese embassy statement that said local people are not against the project built on the Irrawaddy River.

She said the Chinese were ignoring the cultural and environmental concerns of the people in Kachin State.

“The Irrawaddy River is the main river in the country and it is like a main blood lifeline, so all people across Myanmar have a duty to protect it,” Ja Hkawng said.

Mung Ra, another displaced villager opposing any restart, said China has been courting local villagers by supporting weaving training and sporting events. He said he believed these were done to gain local support for restarting the project.

Renewed concerns over the project follow a December visit by Chinese ambassador Hong Liang to Kachin where he met with political parties and social organizations.

Two weeks after the meeting, China’s embassy in Yangon released a statement saying the local Kachin community were not against the project but some outside individuals and social organizations were.

The Chinese statement comes as China has been pushing for a restart of the US$3.8 billion hydroelectricity project, which has been suspended for seven years.

Myanmar's Cardinal Charles Maung Bo has in the past called on Aung San Suu Kyi's government to completely halt the project.

The government formed a commission on Aug. 12, 2016, to review hydropower projects in the country including Myitsone Dam. The commission provided a report with recommendations on whether or not certain projects should proceed. The report was submitted to the president in November 2016 but its content was not made public.