Displaced Hindu families in Myanmar set to be resettled A Hindu family spread the ashes of relatives in the sea at Sittwe in Myanmar's Rakhine State in October 2017. Their relatives were found dead in mass graves near their village in Maungdaw. Villagers said they were attacked by Rohingya militants. (Photo by AFP)

About 190 Hindu families displaced by violence in Myanmar last August are to be resettled from camps into a village near Maungdaw town in conflict-torn Rakhine State.

Ni Maw, a Hindu community leader in Maungdaw, said local authorities discussed the resettlement plan with displaced Hindus two months ago and foundations for the new houses were being constructed.

He said 190 families out of 293 will be resettled in Aung Bala village, just three kilometers from Maungdaw, but the resettlement of the other 103 families is yet to be discussed. It will take at least two months to finish construction of the houses.

Ni Maw said people wanted to move into the new resettlement village, which is surrounded by several Rakhine villages, and expect living conditions to be better than staying in camps.

"People don't want to return to their own villages as they were surrounded by many Muslim villages," Ni Maw told ucanews.com.

He said northern Rakhine has few employment opportunities and most people rely on aid from the government, private donors and Hindu groups in Yangon. "Some people work as daily laborers and some work as hairdressers, but there are not many customers in the region," Ni Maw said.

Some 21 Hindu families are staying in a Hindu temple in Sittwe, the capital of Rakhine, as they don't want to go back to their villages in northern Rakhine.

Ragu Nay Min, a Hindu in Yangon who collects donations and provides food and clothes to the displaced Hindu community in Rakhine, said Hindus don't get full support from the government.

He said people may face difficulties in the new resettlement village and most people fear for their security as the village is close to the border with Bangladesh. 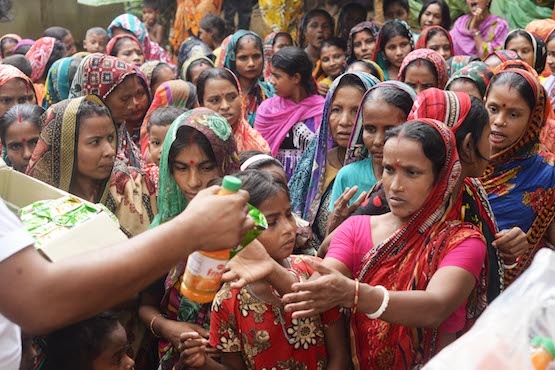 At least 3,000 of an estimated 8,000 Hindus living in Maungdaw, Buthidaung and Sittwe fled during the exodus of Muslim Rohingya during clearance operations by the Myanmar military. Some were internally displaced, while others crossed over to neighboring Bangladesh.

More than 700,000 Rohingya fled to Bangladesh to escape the brutal military crackdown in Rakhine in response to Muslim militant attacks on security posts on Aug. 25, 2017.

The violence affected thousands of Rohingya Hindus. Myanmar's military reportedly found two mass graves with 45 bodies of Hindus in Rakhine and blamed the killings on militants from the Arakan Rohingya Salvation Army (ARSA).

The United Nations says about 500 Hindus belonging to 165 families have fled to Bangladesh.

On May 22, Amnesty International published a report that ARSA killed 53 members of the Hindu community in Kha Maung Seik village and another 46 Hindus from Ye Bauk Kyar village in August 2017.