This is a government strategy to 'keep journalists afraid and under pressure,' says bishop 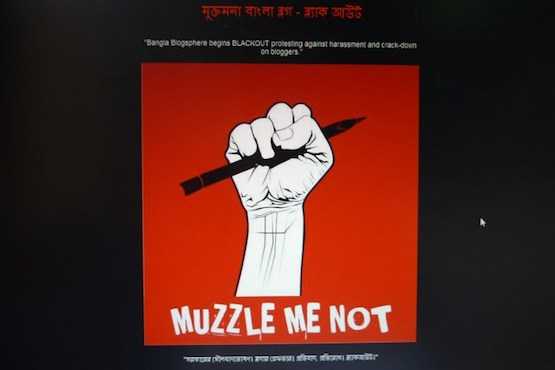 A computer screen in Bangladesh displays an off-line webpage in Dhaka on April 4, 2013. Operators of top Bangladeshi blogs said they had then blacked out their sites to protest against a government crackdown on atheist bloggers in the face of pressure from radical Islamists. Now Bangladeshi media are concerned over government plans to monitor the activities of its media workers going aboard. (Photo by Kamrul Hasan Khan/AFP)

Bangladesh's Foreign Ministry has directed all its overseas missions to monitor the activities of Bangladeshi journalists traveling abroad to identify if they are involved in anti-state activities.

In a letter issued on May 17, the ministry said if any journalist is involved in any activities against "the interest and the image of the country," the person must be identified and reported to the ministry immediately, reported The Daily Star.

The circular stemmed from the 20th meeting of the parliamentary committee of the Foreign Ministry in early May, when they expressed concern over "the negative activities of Bangladeshi journalists abroad as their activities could give the wrong impression of Bangladesh in the international arena."

Some Bangladeshi journalists recently visited Pakistan on state invitation and the committee alleged that they spread propaganda and misleading information about the 1971 nine-month war of independence with Pakistan.

Decades after the war, both countries still have bitter diplomatic relations and recently, bitterness has intensified over the trial for war crimes of Islamist politicians in Bangladesh, who opposed independence and helped the Pakistan army commit crimes against humanity during the conflict.

"It's an attempt to curb freedom of speech even though it is a constitutional right and no one can take it away. I don't expect journalists to take to the streets and demand the withdrawal of the order but instead the government must realize its wrongdoing and reverse from the decision," Bishop Rozario told ucanews.com.

Monjurul Ahsan, president of the Bangladesh Federal Union of Journalists, expressed frustration over the move and said the organization would meet with the government to press them to backtrack.

"This is not good and we are disappointed but we don't have much comment right now. We have contacted the Foreign Ministry for a meeting to pass on our concerns and ask for the withdrawal of the order," he told ucanews.com.

The decision is ambiguous and unacceptable, said Badiul Alam Majumder, secretary of Citizens for Good Governance.

"Every citizen has the right to go abroad and move freely so why should journalists come under watch? The government is supposed to protect the constitution and promote democratic values," he told ucanews.com.

In recent years, the ruling Awami League government has routinely come under fire at home and abroad for failing to protect freethinkers and bloggers from a series of deadly attacks from Islamist militants.

The Bangladesh Foreign Ministry did not confirm the withdrawal of the order. However, a Bangladeshi diplomat in a Western country confirmed that the foreign ministry sent a notice withdrawing the previous order on May 19, according to bdnews24.com, a leading online newspaper.

Since 1992, a total of 21 journalists have been killed in Bangladesh including 16 murdered with impunity, according to the Committee to Protect Journalists.

In 2016, 117 journalists faced abuse and harassment including nine at the hands of government forces and 20 who faced police charges, according to Ain-O-Salish Kendra, a Dhaka-based rights organization.