Critics accuse government of pushing its agenda by dropping subjects like citizenship, secularism and democratic rights Church, political leaders and educationalists have voiced dismay at the Indian government’s decision to drop subjects like citizenship, nationalism, secularism and democratic rights from the school syllabus for grades 9 to 12.

The state-run Central Board of Secondary Education (CBSE) has reduced up to 30 percent of the syllabus for the 2020-21 academic semesters. The government said it was done to reduce the course load for students in the wake of the Covid-19 crisis.

“We don’t know what is in the mind of the current government. Was it done deliberately or was it to push their agenda? We can’t question it and if asked we may be branded anti-national, but one thing I am sure of is that it is very shocking and sad,” T.K. Oommen, an educationalist and former professor at Jawaharlal Nehru University, told UCA News.

“The government has dropped subjects like democratic rights, federalism and secularism, but what about the topic of citizenship? This subject vital for our students has been dropped, which is very dangerous for future generations.

“I said citizenship because this is the only thing that unites us. We have different food habits, clothes, languages, traditions and customs, but one thing that connects us all is that we are citizens of the same country, a country which believes in unity in diversity.

“Against the backdrop of Covid-19, the government has reduced the syllabus, which is fine, but whoever made the decision to drop the subject should understand the importance of citizenship.”

The newly updated syllabus for grade-nine students will not cover democratic rights and food security.

Deleted chapters for grade-12 students are on India’s relations with neighboring countries. Economic development, social movements in India and demonetization will also not be taught, the government said. 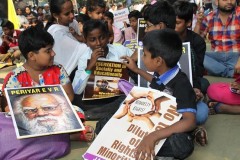 However, Krishna Kumar, former director of the National Council of Educational Research and Training (NCERT), said that by removing chapters from CBSE books, the rights of children to read and understand are being taken away.

“There is a contradiction in the chapters that the government has decided to remove. Remove the chapter on federalism and teach the constitution to the children — how will this happen?”

Taking to Twitter to express her anguish, Mamata Banerjee, chief minister of West Bengal state, said she was shocked to learn that CBSE has dropped topics like citizenship, federalism, secularism and the partition.

“We strongly object to it and appeal to the federal human resources development ministry to ensure these vital lessons aren’t dropped”, she said.

Congress leader Shashi Tharoor said that "one has to doubt the motives of those who selected the topics to drop.”

“Have they decided democracy, diversity, secularism and the like are more dispensable concepts for tomorrow’s Indian citizens?” he tweeted.

A.C. Michael, national coordinator of the United Christian Forum, told UCA News: “It is strange that CBSE has asked NCERT to drop some of the crucial chapters for the children who are the future of this country.

“Certainly the federal government is trying to push its agenda using its institutions. Unfortunately, no one is questioning it.”