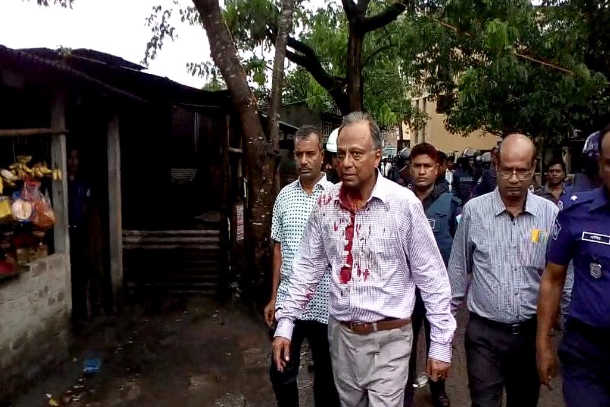 A physical assault on a former Bangladeshi newspaper editor linked to the main opposition party by supporters of the ruling party has sparked criticism from the church and media watchers.

Mahmudur Rahman, 66, former acting editor of Dhaka-based Amar Desh (My Nation) newspaper, was attacked on the premises of Kushtia district court in western Bangladesh on July 22.

Rahman went to the court from capital Dhaka to secure bail in a defamation lawsuit filed against him in December last year. Dozens of activists of Chhatra League, the student front of the ruling Awami League, armed with sticks and bricks attacked his car as he started his journey home, local media reported.

The car's windows and doors were smashed while Rahman sustained injuries to the cheek, forehead and head. He survived by fleeing into a lawyer's chamber.

"This was a premeditated attack. Those who perpetrated this violence must confess the crime in court one day," Bengali daily Prothom Alo quoted Rahman as saying.

"Every person in this country has the right to resort to legal recourse when needed. If a person remains vulnerable to violence even in a court, this is unacceptable and shows how poor our law and order system is," Nokrek told ucanews.com.

"We have seen police standing silently when the attack was carried out, which means police were biased. This outrageous act is a disgrace for our so-called democracy."

"Mahmudur Rahman might be a controversial person but no sane person would support this brutality. The ruling party should realize that if it fails to control unruly supporters, it must pay the price dearly in near future," the member told ucanews.com on condition of anonymity.

Rahman's Amar Desh newspaper was a supporter of the Bangladesh Nationalist Party (BNP), the country's second-largest political party. He is also an organizer of a BNP-leaning professional group.

The government shut down the paper in 2013 after allegations of fabricated reporting and supporting Islamic radical groups. However, an online version of the paper is still operated from Australia.

Rahman is a well-known critic of the Awami League. He plunged into controversy over his criticism of the country's war crimes tribunal prosecuting opposition politicians for their crimes against humanity during the 1971 war of independence from Pakistan.

He faces about 80 court cases involving charges of defamation, sedition and inciting religious tensions and violence. He served three years in prison following arbitrary detentions and was released in November 2016.