Friends of O'Brien allege the order came from the Vatican 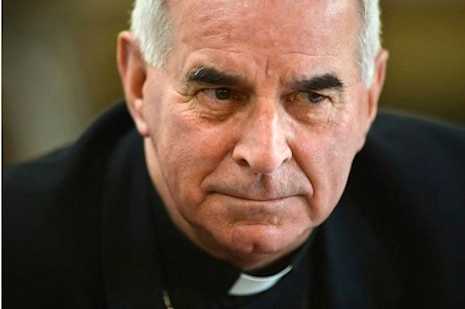 By Gerry Braiden for Herald Scotland

CARDINAL Keith O'Brien has been told by the Vatican to leave the UK amid concerns of wreaking further damage on the Catholic Church in Scotland.

Friends of the cleric have said he has been told by Rome to shelve his plans to retire to a church-owned cottage in East Lothian and instead leave the country.

The Herald understands Cardinal O'Brien was given the news yesterday afternoon [on Friday May 3], three days after being photographed moving his personal belongings from his official residence in Edinburgh to the residence in Dunbar where he had been spending regular weekends over the past few years.

Friends of the cleric have said he has been told by Rome to shelve his plans to retire to a church-owned cottage in East Lothian and instead leave the country.

The parish priest in Dunbar, Canon John Creanor, is understood to have voiced upset at the Vatican's move against his "dear friend".

It is the clearest indication yet of the Vatican's unwillingness to let the matter drift and concern that the Cardinal's admission of gay activity over decades and allegations of abuse towards trainee priests continues to damage the Church.

Investigations also continue into claims made by a serving priest in Lanarkshire of a "gay mafia" running seminaries in the 1980s and naming leading Catholic figures.

The Herald revealed on Thursday Archbishop of Glasgow Philip Tartaglia was behind an appeal to the Vatican to intervene after Cardinal O'Brien's re-emergence in Scotland this week.

Cardinal O'Brien remains the only cardinal in Britain and Scotland's most senior Catholic churchman, leaving UK clergy powerless to act. However, he is not without support. One source last night said: "The cardinal has been advised not to relocate to the parish in Dunbar and has been told he should leave the country. That's extremely disappointing and not a Christian way to treat someone. There's clearly pressure from within and outwith the Church and no show of unity.

"People expect some sort of jail sentence for Keith O'Brien or at least a desire to see him retired to monastic life. It would certainly be convenient for them. Personally, I find it an atrocious way to treat someone who has been facing up to their responsibilities."

A recent petition organised by the parishioners of Our Lady of The Waves in Dunbar saw more than 90% of those attending the Saturday vigil and Sunday mass signing a statement declaring "our support and affection for Cardinal Keith O'Brien".

But, while leading historian Professor Tom Devine said the cardinal should be left alone, senior figures in the Church said he was "still causing immense damage".

Yesterday, Cardinal O'Brien, 75, was reported to have admitted the scandal had been difficult and humbling. The former Archbishop of St Andrews and Edinburgh was forced by Pope Benedict XVI to retire after admitting "inappropriate behaviour" with four priests and a seminarian.

He was quoted as saying: "I'm just trying to do my best to live a good Christian life myself now. Many people have been helping me to go back on the right path and that's what I have to do. But I haven't always managed to live that in my own life.

"I have been supported by many good Christian people and many people of no religion at all who realise I have said sorry for anyone I have offended. If Christianity is about anything at all, it's about forgiveness. That's what I have to do as a cardinal priest – just forgive the wrongdoer and help them go back on to the right path.

"It's been quite a difficult, quite a humbling experience for me. It's very difficult for them [the men whose complaints led to his retirement]. That is why I have apologised for being a teacher who has not been able to live up to the teaching of the Church.

"We know what's against God's law. Consequently, we should try to live by God's law. I've apologised for my failures in that respect."

Asked about any Vatican investigation, he said: "It's up to those who are responsible in Rome for me to answer that sort of question."