Indian men carry food and water to people stranded by floods in Pandanad in Alappuzha district in the Indian state of Kerala on Aug. 21. (Photo by Manjunath Kiran/AFP)

Sheela Joseph and her family spent a week in a relief camp before they were able to return to their flood-hit house on the banks of Periyar River in the southern Indian state of Kerala in late August.

She was among 1.3 million people who found themselves displaced in the middle of last month when flash floods hit the state.

Many have since gone back home as the waters have receded but many thousands still reside in temporary shelters as their abodes remain waterlogged and uninhabitable, if not completely destroyed.

Joseph lives in Ernakulam district, where fear and poverty have become common crosses to bear.

"We've lost everything," she said. "And now there are deep cracks running along the walls of our house. I don't know if it's safe for us to stay here. But we didn't have any choice as the relief camp closed."

Many people in the area report similar misgivings as the foundations of their homes were submerged for days, causing all sorts of havoc. Some said they fear the buildings could collapse at any moment.

According to official statistics, over 70,000 houses in this state of 33 million have suffered some degree of damage as a result of the latest floods.

The church has played a major role in rescue and relief efforts and is now trying to address this problem as part of its post-flood rehabilitation.

Father George Vettikkattil, deputy secretary of the regional bishops' Justice, Peace and Development Commission, said he is working out a project to build new houses and repair damaged ones. 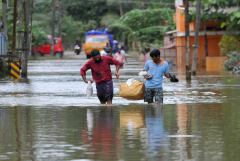 The focus in the past three weeks has been on providing food and material support to those who have returned home while also helping people in the camps, he told ucanews.com

"About 170,000 lay people from all 32 dioceses in Kerala, and many from outside, have been involved in the rescue and relief operations," the priest said, adding that the list includes 3,000 priests, 6,500 nuns and 354 seminarians. "Most of them are still cleaning up the houses and making them liveble again."

Many churches, convents and church-run schools, hospitals and other institutions were submerged or otherwise damaged by the floods. Ten out of 11 convents under the Franciscan Clarist congregation alone were inundated.

"We've cleaned seven convents and brought the nuns back from the camps. Three of the convents are not in a liveble condition as they suffered heavy damage, so we plan on rebuilding two and repairing one," said Sister Litty, provincial superior of Devmatha province.

Nuns at Lisieux Convent in Alappuzha district have also pitched in to help restore the convent but they said much work remains to be done.

"The cement floors in the living rooms are still damp and there's a strong smell of mud and sewage. It's unbearable at night when we shut the doors and windows," one of the nuns told ucanews.com

Most of the damaged houses are in similarly dire straits.

Stagnant water in the surrounding areas has become a breeding ground for mosquitoes, posing hazards of vector-borne diseases. Cases of leptospirosis, a bacterial disease that often triggers muscle aches and a strong fever, have been reported in several areas.

Father Joseph Kalarickal, director of Changanacherry Archdiocese's social service wing, said he is now focusing on Kuttanad, a low-lying area where some houses are still underwater 20 days after the floods ceased.

"Those dioceses that weren't so heavily affected are also sending teams of priests, nuns and members of laity organizations with relief materials," he said.

"Many dioceses from outside Kerala have joined in by offering material support and manpower. Teams have been split into groups and sent to different regions. We are working with other voluntary organizations and government agencies to clean and repair damaged electrical and plumbing lines."

Father John Manakkunnerl, vicar of St. George Church in Kuttanad, said most houses in his jurisdiction were filled with knee-deep mud, not to mention snakes and animal carcasses.

"It will take weeks for life to return to normal. We are giving food, potable water and household articles like beds, cots and clothes to families in need. We are also supplying solar lamps to those who don't have any power at home," he said, adding plans are now being drawn up on how to build and repair damaged houses.

Archbishop Joseph Kalathiparambil of Veraploy issued a pastoral letter on Sept. 2 urging parishioners to curb all celebrations and donate the money instead to funds designed to support the rebuilding of flood-destroyed houses.

He gave the example of his plan to auction his new car and donate the money to the rehabilitation efforts.

Father Vettikkattil said the church would support people who have lost their sources of income by helping them find new jobs.

He said several projects would be rolled out after the first phase of rehabilitation is complete.

The work is being coordinated by the social service forum of the regional bishops' council and other social service societies in local dioceses, he said.