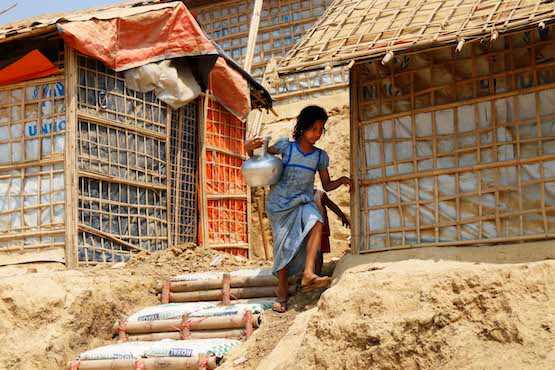 A Rohingya girl returns to her tent down the hilly slopes at Kutupalong refugee camp in Cox's Bazar on March 18. (Photo by Stephan Uttom/ucanews.com)

Luckless Rohingya refugees in southern Bangladesh look to the skies for portents of calamity.

Makeshift shelters, mostly made from bamboo and tarpaulins, now overwhelm the once-forested landscape of Kutupalong refugee camp in Bangladesh, some 35 kilometers from coastal Cox's Bazar town.

This and other camps are sanctuaries for hundreds of thousands of people who fled extreme violence in Rakhine State, just across the Naf River in largely Buddhist Myanmar.

However, members of the Muslim minority huddling in unsanitary conditions remain in great peril.

The monsoon season is approaching and humanitarian workers fear things will get worse — much worse.

Many of the refugee shanties are built on hillsides of dry crumbling earth, posing a threat of catastrophic landslides in a nation long-blighted by natural disasters.

Cox's Bazar shelters about 867,000 refugees who have been crossing from Myanmar since 1991, according to humanitarian aid workers.

About 770,000 arrived following persecution and military crackdowns in October 2016 and August 2017. There are more than 400,000 refugees in the Kutupalong camp.

Including the host community, the United Nations' World Food Program (WFP) feeds about 880,000 people and has appealed to donors for an additional US$230 million in humanitarian funds.

All the camps are located in what was previously a verdant strip along the Bay of Bengal.

Only patches of green remain and they are not expected to survive the human avalanche as refugees cut down trees to build dwellings and obtain firewood.

Standing in the middle of Kutupalong camp, Shelley Thakral, communications officer in Cox's Bazar for the WFP, cautions that conditions are ripe for disasters to unfold.

Thakral describes Kutupalong as a "mega-camp" in which the cheek-by-jowl existence of inhabitants exacerbates risks.

There is much to do if lives are to be saved, Thakral said.

Some 150,000 people are most vulnerable to flooding and landslides. Strong winds pose a further threat.

The WFP collaborates with U.N. refugee and other officials to implement drainage and land stabilization measures, but few believe the mitigation will be adequate.

There is also a disaster preparedness program to provide for emergency responses.

"We need to make sure we reach all — including young children, pregnant women, new mothers and elderly people — so that they get food, medicines and supplies in advance," Thakral said.

There will be several depressions on the Bay of Bengal from April and at least one strong cyclone, he predicted.

"The temperature in Cox's Bazar has been increasing day by day over the past few weeks and once it crosses 27 degrees Celsius, it could form depressions and consequent cyclonic storms," Pal said.

Located on the floodplains of the world's largest river delta system, Bangladesh is naturally prone to cyclones, floods and landslides. A women-friendly space at Balukhali refugee camp in Cox's Bazar on March 16. (Photo by Stephan Uttom/ucanews.com)

Clearing of forests for firewood

Rare animals could become extinct and humans face the specter of a rapid spread of communicable diseases.

On the environmental front, consideration is being given to use of liquefied petroleum gas (LPG) as an alternative to firewood, but this would require additional funding, not least for training and safety precautions.

Health experts are bracing for potential monsoon outbreaks of water-borne diseases as well as those carried by mosquitoes and other insects.

Mir Abbul Karim, assistant health director at the Bangladesh Red Crescent Society, is alarmed over a lack of capacity to deal with any serious outbreaks of, for example, diarrhea and cholera.

"Many people, especially children and the elderly, are highly vulnerable," Karim told ucanews.com.

For a long time, Cox's Bazar was largely a no-go zone for humanitarian groups due to government restrictions. But things have changed markedly since August.

More than 150 international and local humanitarian organizations are based in the Cox's Bazar district and most focus on refugees.

The WFP, the International Committee of the Red Cross (ICRC) and Catholic agency Caritas are partnering with the Bangladesh government to provide food as well as medical, education and other services.

The WFP has involved locals in providing school meals for refugees as well as livelihood projects such as cattle rearing and the setting up of small shops.

Rights advocates build awareness on the needs of refugees, particularly the aged, women and children.

The ICRC says it is vital that food, medical and other needs of the host population are catered for. This was necessary to maintain harmonious relations between locals and refugees.

Graziella Piccoli, an ICRC public relations officer, told ucanews.com that the agency interacts with both groups.

"The social infrastructure in Cox's Bazar is unable to absorb the quick and massive rise in population and it has become difficult for everybody," Piccoli said.

Meanwhile, all those living in the Cox's Bazar area are awaiting with trepidation for the arrival of the monsoon, hoping they will be spared the worst that nature can unleash.