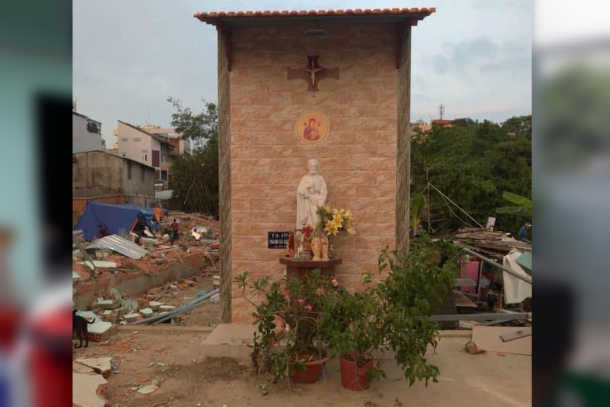 Some of the remains of Redemptorists owned property for disabled war veterans that was destroyed by the government. (Photo supplied)

More than 100 homes — including a church-run home for disabled war veterans — were forcibly demolished by state officials in southern Vietnam.

Those living in the dwellings, most of whom are Catholic, said they were given little or no warning about the demolitions in Lộc Hưng near Ho Chi Minh City.

Authorities from Tan Binh district "completely knocked down 112 illegally built houses" on a plot of land on Jan. 4 and Jan. 8 the state-run Tuoitre newspaper reported.

The publication quoted district officials who accused local people of illegally trading the land which the government said it has plans to use for building schools and public facilities.

Among the destroyed buildings was a Redemptorists owned house that was home to 18 war veterans who lost limbs in the Vietnam War. The veterans have no relatives and sell lottery tickets for a living.

Veterans said police forced them to immediately evacuate and take their belongings with them before demolition of the building began early on Jan. 8. The veterans said no notice was given about the demolition. Some didn't even have time to take their prosthetic limbs and crutches with them.

A veteran said police promised to give them each 2 million dong (US$86) if they moved to police stations but the former soldiers refused because they do not trust the police.

He said his fellow veterans went to the Redemptorists' monastery for support.

Father Thanh said statues of St. Joseph, Mother Mary and a cross erected at the veteran's house were taken away by police.

"We are deprived of our kind heart and actions for our brothers and sisters in need by the government's eviction," the priest said.

He said the cost of the now demolished house was covered by benefactors at home and abroad. Father Thanh said the house was built on a 220-square-meter plot which the Redemptorists bought from a local family who had lived there for long time.

Land owned by the Society for Foreign Missions of Paris (MEP) since 1954 was also seized, reported Asia News. An image taken inside Redemptorists owned property for disabled war veterans before it was destroyed. (Photo supplied)

Cao Ha Truc, a Catholic father of four, said the government destroyed his livelihood by knocking down his 11 rental rooms. Truc was detained, questioned and allegedly tortured by police on Jan. 8 for protesting against the eviction. His family had lived on and cultivated the land since 1954 after they moved from the North to escape communist persecution.

Some activists described the eviction as cruel and heartless acts which have made hundreds of people homeless before the Lunar New Year festival which falls in early February.

Authorities have said they would offer evicted householders financial support, but not compensate for any damages and loss.

Responding to how the government says they intend to use the land, Father Thanh said locals aren't against development projects but they oppose how the authorities go about getting things done.

The seizing of church land and properties used by local Catholics by the communist government has been an ongoing issue in Vietnam.