Despite facing poverty and homelessness for much of his life, Joseph Won puts other needy people first 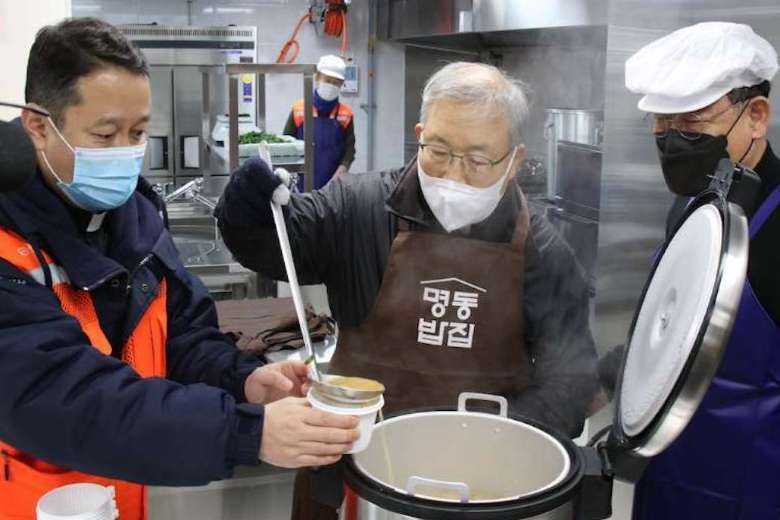 Everyone in Jjokbang village knows Joseph Won Yong-hee as a good and kind-hearted man. Each time he wanders around the village in Huam-dong near Seoul on his bicycle, people greet him with a smile.

Won, 53, has an intellectual disability and has suffered from extreme poverty and homelessness since childhood.

Yet over the past five years, he has been visiting the village, where he was born, almost every day. He distributes lunch boxes to some 20 needy people as a volunteer for a Catholic charity.

Won feels happy when people thank him for the services he provides in collaboration with the church-run Catholic House of Love and Peace.

"I feel good when I hear them say thank you. I am happy when I can serve with a happy heart," Won said as he completed a food delivery, reported the Catholic Times of Korea.

Won’s life has been full of challenges and difficulties since he was 11. He grew up as an orphan after his parents died. He did whatever he could to earn money for survival, such as polishing shoes, selling newspapers, day laboring and collecting and selling scrap metal and junk.

For years, churches in Korea have been providing shelter and food to poor and needy people across the country like Won

Due to poverty, he was unable to get basic education and his intellectual disability restricted him from getting any decent job. So, he struggled for survival in a difficult environment.

Despite South Korea being an economic powerhouse, about 16.7 percent of its people live below the poverty line, according to a report from the France-based Organization for Economic Cooperation and Development. Based on 2019 data, the organization ranked South Korea fifth among 33 developed nations for relative income poverty.

About half of the elderly people in South Korea live in poverty due to no income and savings, noted Borgen Project, a non-profit organization tackling poverty and hunger globally.

For years, churches in Korea have been providing shelter and food to poor and needy people across the country like Won.

Sisters of Charity of St. Vincent de Paul in Suwon-si city in Gyeonggi province have been providing free food, clothes and daily essentials to the poor and needy for about 10 years.

In January 2017, Seoul’s Catholic House of Love and Peace took an initiative to assist poor people in Jjokbang village. Won participated in the program and started delivering lunch boxes to poor neighbors. Since last year, he has taken shelter in the center.

From time to time, he visits the village to check whether anyone is struggling with any difficulty and needs help.

Once people teased Won for his disability and poverty, but everyone now treats him with respect. The villagers get in touch with him when they face any difficult situation.

The money you earn from work comes and goes, but the work you do for God [sharing] doesn’t disappear

Won thanks God for his life and ability to serve those in need. He prays to God before he leaves his house and after he returns as his considers his service “God’s work.”

His prayers are as simple as this: “I will do my best to serve” and “I have been working hard in the service.”

Besides going out to serve lunch boxes in the village, which is about a 40-minute walk from his residence, Won still collects scrap metal and junk to sell and earn money. He often donates money to the center in order to have an “extra dish” for the poor grandmothers of Jjokbang village.

Won says he wants to carry out the service as long as he is alive.“The money you earn from work comes and goes, but the work you do for God [sharing] doesn’t disappear. I pray to God to do better in my service. I want to serve more as long as I am alive,” he said.