Disabled but determined to succeed

Catholic artist puts disability aside to make his own way 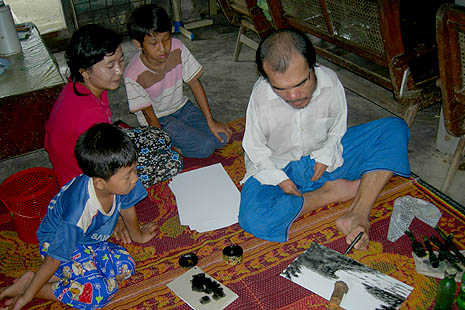 Being physically disabled in Myanmar is a struggle but John Paul Maung Thit, who is unable to use his arms, is trying to get by on his own by painting with his toes. Maung Thit, who now lives in Yangon, said he became interested in art when he started painting pictures -- especially roses and Holy scenes -- while staying at the Holy Infant Jesus center for the disabled and orphans in Payaphyu in Taunggyi archdiocese. The disabled Catholic artist, who is now 47, was sent to the center when he was 15 after the death of his father. He stayed there for 13 years. With the help of the Philippine Ambassador and Archbishop Matthias U Shwe of Taunggyi, he got the chance to learn painting from well known artists in Yangon from 1992 to 1995. When he moved to Yangon permanently in 2000, he found life very difficult until he met street painters and started painting pictures and selling them in crowded places, such as at pagodas, market places and bus stops. The Catholic artist says he also likes to go to Buddhist festivals where many devotees like to buy his pictures, which he sells for 300 kyat (about US$0.30) each or 500 kyat for two pieces. “As long as I’m healthy, I can go to these places, do my artwork and know I will make some money. If it’s not raining, I can earn about 5,000 kyat, but on rainy days it can be much less,” he said. He says he is making a living but would obviously like to make more. He lives in a rented house, which along with the utility bills, children’s school fees and food sees his monthly expenses at around 70,000 kyat. “So we can’t save money to buy a house,” Maung Thit lamented. An estimated 1.3 million people in Myanmar are living with a physical or mental disability, according to a survey. The nationwide survey of 108,000 households conducted in 2008 and 2009 by the Department of Social Welfare and Leprosy Mission International – found that one in 10 households in Myanmar has a person with a disability and that these households are at a significant economic disadvantage. Maung Thit says he has to live with his disability but at times it is a struggle to come to terms with it. “Sometimes I feel so depressed and downhearted being disabled and am envious I do not possess the same strength and abilities of ordinary people.” He said if he kept thinking negatively about his disability he would not have the heart to work and would not have the strength to struggle. This would make him a beggar living on the sympathy of other people, which is not what he wants to do. Maung Thit said he wants to do things for himself, especially since he was getting support from the Church until he was married in 1996. During his stay in Payaphyu, "I didn’t have to worry about food, board or clothing as the Church supplied everything for us," he said. According to Sister Rose Khin Pan, Superior of the Holy Infant Jesus center, the Church takes responsibility for the daily needs of 174 people thanks to help from generous donors. “Maung Thit’s efforts in trying to take care of himself and his family are an achievement not just for him but of the center,” Sr. Khin Pan said proudly. MY14368