Police officers stand guard at Baga beach in Goa. All too often, however, the authorities, far from cleaning up the coastal state, are in cahoots with murky figures dragging down its rich culture. (Photo by Indranil Mukherjee/AFP)

The annual tourist season began in mid-October in Goa, India’s most famous beach destination. This year the government of the western state, run by Prime Minister Narendra Modi’s pro-Hindu Bharatiya Janata Party (BJP), has promised to make it an enjoyable experience for tourists.

However, local people in this former Portuguese colony are increasingly suffering from tourism fatigue and losing their cool, thanks to drunken holidaymakers, reckless drivers, broken beer bottles, road congestion and increasing litter.

Ultimately, however, it is money that keeps the world moving.

Tourism has helped to create hundreds of rags-to-riches stories on theses palm-fringed sandy beaches. One of them involves Goa’s minister of science and technology, Michael Lobo. From washing dishes at the age of 14 in a wayside restaurant in Goa, he drove a Mercedes at the age of 24. 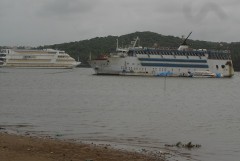 Goa gets tough on immigrants taking up Portuguese surnames