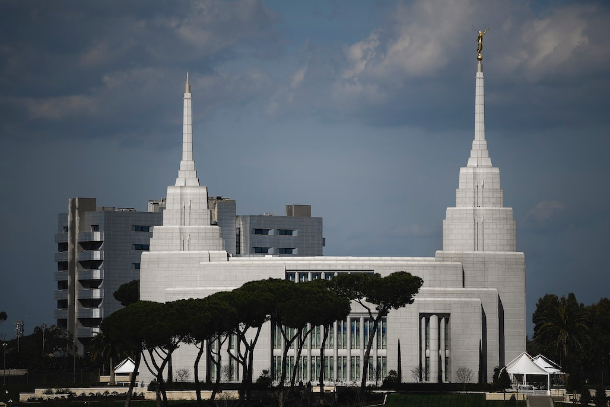 Italy's first and Europe's largest Mormon temple of the Church of Jesus Christ of Latter-day Saints is pictured in Rome on March 9, 2019. The 40,000-square-foot building was opened in January 2019. (Photo: Filippo Monteforte/AFP)

The US-based Church of Jesus Christ of Latter-day Saints, also known as Mormonism, has announced the building of its first temple in mainland China, a move experts believe has links with China-US diplomacy.

The Mormons' announcement comes as China continues to clamp down on religious freedom, and it shows the Chinese administration the support they enjoy, said Ying Fuk-tsang, an expert on Chinese Christians.

"As the Mormons have established good relations with the Chinese government, the announcement is by no means is an ill-considered move," said Ying, director of the divinity school at the Chinese University of Hong Kong

Russell M. Nelson, chairman of the Utah-headquartered Mormon Church, announced on April 5 that permission had been granted to build a temple in Shanghai, international media reported.

He said their first temple on the Chinese mainland would help fill a gap created by the closure of their temple in Hong Kong for renovation in July.

The Mormons' Chinese website said the temple in Shanghai will be more like a clubhouse and will be available to Chinese members of the Mormon Church.

The building "will be simple and unpretentious" and will respect the local culture and environment, it said. However, it did not give a date for the temple's opening.

The temple does not mean that the legal status of Mormons has changed on the mainland, it said.

The Mormon Church remains "politically neutral" in all countries and it does not plan to send missionaries to mainland China, it claimed.

"We are very interested in following Chinese laws and policies," it asserted. Ying said that, according to existing laws, foreigners can still set up places for religious activities in China as long as they are approved by the Chinese government.

Ying said that what appears on the Mormon website makes it clear that they have agreed to follow the policies and laws of China.

The Chinese government wants to restrict Mormonism, and Mormons have accepted the restrictions, including the appearance of their temple. "It certainly won't look like a religious building," Xing said.

They express a "willingness to cooperate actively with laws and regulations regardless of their church's teachings and missionary policies," Ying added.

He said the Shanghai temple "will only be a gathering space for Mormons, and it does not mean that the Chinese government officially recognizes Mormonism as a legitimate religion in China."

For the Chinese government, the new temple has diplomatic value as Mormonism is influential in US politics, he said.

"If Mormonism is important to the Chinese market, then China will use Mormonism to influence the US political scene," Xing said. But having the temple in Shanghai is "still a breakthrough in the relationship between religion and politics."

The Vatican has had no diplomatic ties with China since 1950, but in 2018 the Vatican signed an agreement with China reportedly allowing the Vatican to appoint bishops in China.

Since 1950, the Chinese Communist Party has rejected bishops appointed by the Vatican and appointed its own bishops for the state-controlled open church.

The party's move divided the China Church as Catholics who could not accept state-appointed bishops joined the underground church loyal to the pope.