Diocese lobbies for Philippine tribe to get permanent home 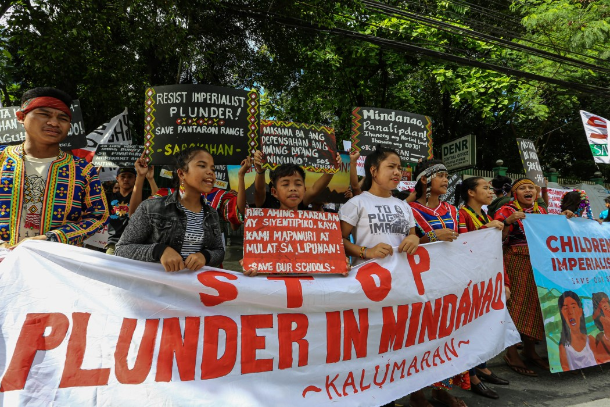 Tribal people from the southern Philippines protest in Manila to call for mining on their land to be halted. (Photo: Jire Carreon)

Share this article :
Church leaders in Romblon Diocese in the central Philippines have called on the government to rehouse Ati tribal people affected by tourism projects.The diocese’s Episcopal Commission on Indigenous Peoples made the appeal following reports that local government officials planned to build a casino in the area.Father Billy Gregorio, head of the commission, said Ati families affected by the project must be relocated. The local government had committed to donate two hectares of land, he said, but deliberations by council officers were still ongoing.The Ati are the original settlers on the island of Romblon, which is 40 minutes by boat from the world-renowned Boracay island.Mayor Ronnie Samson, from the town of San Jose in Romblon, admitted the local government was reviewing the idea of allowing the island to get its first casino.
Related News “The Catholic Church has been publicly opposing casino operations,” noted the mayor, “but it is still up to the local government.”Claribelle Jane Alfeche, of the British-Filipino company Ocean Edge Resort, said it employed Atis in its resort. “Our ultimate goal should be to uplift their way of life through cultural preservation,” she said.Environmentally critical projectsIn Manila last week, tribal groups held a demonstration outside the Environment Department’s national office to condemn its alleged inaction on environmentally critical projects.“It has failed to curb applications and commercial operations of big mining companies, plantations and other big businesses,” said Gia Glarino of the group Kalikasan.Coal mining companies have long planned for projects affecting at least 70,000 hectares of tribal land at the Andap River Valley Complex in the Caraga region of Mindanao.Activists said tribal schools and communities have been repeatedly forced to evacuate and subjected to food blockades by the military.In the Pantaron Mountain Range, also in Mindanao, at least 31,180 hectares of old growth forests are being explored by large-scale mines. Schools have also reportedly closed following military operations.In the Daguma Mountain Range, almost 143,000 hectares of Integrated Forest Management Agreements owned by one family are being applied for conversion into large-scale mining projects.In 2017, Datu Victor Danyan and seven of his tribe’s members tending to their farmland were killed by gunmen believed to be soldiers.“All projects with provisional approvals situated in these intense conflict areas must be canceled,” Kalikasan declared.The environmental group has called for an independent investigation into alleged abuses of security personnel against tribal people.