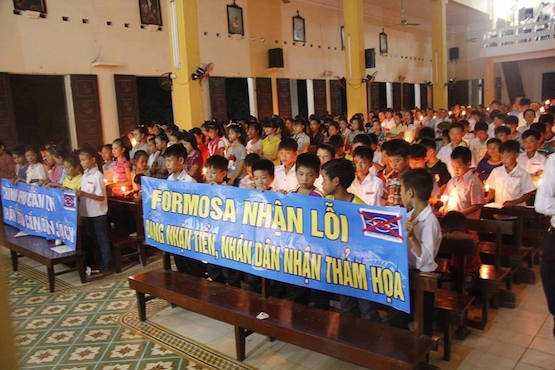 More than 1,000 parishioners attended a vigil for environment protection on July 31 at Nhan Hoa Church in Nghe An province. (Photo courtesy of www.tinmungchonguoingheo.com)

In the wake of one of biggest environmental disasters in Vietnam's history, the Vinh Diocese is holding a "day for the environment" Aug. 7 to raise awareness about environmental protection.

"Inspired by Pope Francis' Laudato si' [the encyclical letter on caring for "our common home"] we need to act to improve our environment and increase conservation awareness among communities," Father Anthony Nguyen Van Dinh, head of the diocese's Justice and Peace Commission, said in an announcement that was read during last weekend's Mass at local churches.

"All parishes in the diocese will celebrate Mass, participate in the adoration of the Eucharist and pray for environmental protection," Father Dinh said adding they should reflect on the May 13 open letter on marine pollution issued by Bishop Paul Nguyen Thai Hop.

The priest urged all Catholics to clean the environment around their parishes, clearing stagnant ponds and getting rid of garbage. Father Dinh also asked parishes to innovate other activities that would help protect the environment in their own areas.

Since early July, some parishes in the diocese have been staging peaceful demonstrations and holding vigil prayers on weekends calling for environmental protection.

Father Dinh said, "Our living environment is being seriously menaced" by a Taiwanese-built steel plant owned by Formosa Plastics that reportedly discharged hundreds of tons of toxic waste into the waters and soil of Ha Tinh province.

Natural Resources and Environment Minister Tran Hong Ha said on July 29 that Formosa had paid the first half of a US$500 million fine that will be used to clean the water and compensate those affected. Agriculture and Rural Development Minister Nguyen Xuan Cuong said the ministry is counting the number of people whose livelihoods were hurt by the marine disaster that began in April.

Father Dinh said the disaster has been made worse by the government's slow reaction and lack of transparency.

On July 27 the Justice and Peace Commission petitioned the government to provide emergency aid to fishermen.

"Many fishermen get into heavy debt due to losing [their] income and having no work," said Father Dinh.

The commission's petition also urged the government to bring Formosa and the relevant government authorities to court. It also requested Formosa to be closed down.

More than 90 intellectuals, former government officials and Catholic priests petitioned the 494-member National Assembly on July 18, to promote environmental awareness and issue laws on environmental protection in its first long-month session that started July 20. They also asked the national assembly to hold a referendum on closing Formosa.