Government ignores the needs of the Papuan people leading to conflict, violence, they say 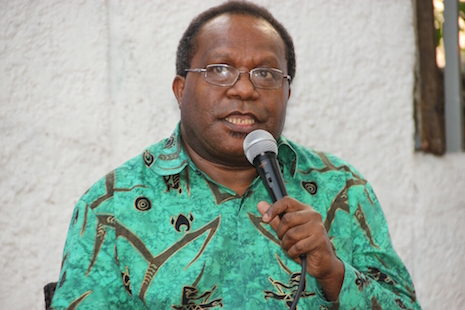 Papuan Fr. Neles Tebay says the lack of development in the resource-rich region of Papua has perpetuated an ongoing conflict in the region. (ucanews.com photo by Ryan Dagur)

At least 75 diocesan priests from five dioceses in the West Papua region have voiced concern over the treatment of the Papuan people that has spurred various acts of violence in Indonesia’s easternmost provinces.

“We see injustices in the fields of economy, social, culture and politics in the land of Papua. We are concerned about various acts of violence happening in the Bird of Paradise Land. Violence is faced by violence. All these violent acts hamper the development, harm the peace, and hurt the feeling of so many people,” the priests said in a statement released following their recent meeting in Jayapura, Papua province.

Among those diocesan priests attending the June 30-July 5 meeting was Father Neles Kebadabi Tebay from the Jayapura diocese. Other dioceses included Agats-Asmat, Manokwari-Sorong and Timika as well as the Merauke archdiocese.

While Papua is Indonesia's richest province in terms of natural resources, it lags behind others in terms of development, and the little development that occurs rarely benefits the Papuan people, the priests said.

Speaking with ucanews.com over the phone on July 13, Father Tebay said that such injustices could be seen in the development programs that focused only on district towns, where migrants mostly from Java now stay.

“It's based on what we see in our parishes located in remote areas,” he said.

Fr. Tebay said that migrants comprise about 70 percent of the total population in district towns such as Jayapura, Keerom, Manokwari, Merauke, Mimika, Nabire and Sorong.

According to data from the General Election Commission, both Papua and West Papua provinces had an estimated population of 5.3 million in 2014.

"We see that school buildings in remote areas look good but there are no teachers. In the healthcare field, the number of doctors and nurses is very limited," Fr. Tebay said.

This dissatisfaction, he said, has led to a series of violent conflicts with the state.

Lambert Pekikir, a Papuan and a pro-independence activist, urged the Indonesian government to respect the rights of the Papuan people.

"Such inequality will grow a deeper dissatisfaction. The government have so far said only words, but the problems remain," he told ucanews.com.

Meanwhile, Lamadi de Lamato, spokesperson for Papua's governor's office, acknowledged that there were gaps in the government services offered to largely Papuan communities. But he asserted that the local government has taken strategic efforts to prioritize development programs.

"Since last year, the local government has allocated 80 percent of its budget to the districts. The province receives only 20 percent," he told ucanews.com.  "For sure, there are four agenda priorities: education, health care, economic growth, and development of infrastructures," he said.

Papua has been beset by a decades-long conflict over Indonesia’s takeover of the region following the withdrawal of the Dutch colonial administration in 1962. The guerrilla Free Papua Movement has led a low-level insurgency against the state, marked by sporadic clashes and crackdowns on the Papuan people.