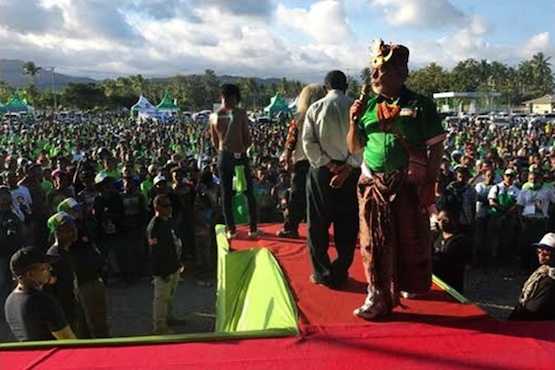 The Catholic Church in Timor-Leste has urged political parties not only to compete for parliamentary seats but also to ramp up their efforts to reduce poverty and improve the lives of people ahead of parliamentary elections next month.

Twenty-one parties will compete for 65 parliamentary seats in an election scheduled for July 22.

The National Election Commission kicked off the election campaign on June 20 which will end July 19.

"The most important thing is that political parties take concrete action to improve the lives of today's poor," said Father Herminio Goncalves, chairman of Dili Diocese's Justice and Peace Commission.

While more than 80 percent of people rely on agriculture, there has been no breakthroughs in the agricultural sector. Rice fields have dried up because there is poor irrigation, is a notable case.

According to the government poverty in Timor-Leste is decreasing with the national poverty rate having fallen from 50.4 percent in 2007 to 41.8 percent in 2014.

However, the poverty rate remains high in the country. Many people remain without electricity or sanitation, malnutrition, unemployment and poor education, church leaders and observers say.

"This is a serious problem that needs immediate attention from parties," Father Goncalves said on June 26.

The priest also said the church will continue voicing these concerns throughout the campaign.

According to the International Republican Institute, a U.S.-based nonprofit and nonpartisan organization committed to advancing freedom and democracy worldwide, the Fretilin party and CNRT (National Congress for Timorese Reconstruction) established by Xanana Gusmao in 2007 are the election frontrunners, followed by the Democratic Party and the newly established People's Liberation Party by former president Taur Matan Ruak.

Justino Sapalo Ximenes, dean of faculty of law at the University of Dili, said Fretilin and CNRT would likely dominate parliament, while the Democrats and People's Liberation will struggle.

The present Timor-Leste parliament has Fretilin with 25 seats, CNRT with 30 seats, the Democrat Party with eight, while the Frenti Mudanca has two seats.

"It's important for parties to focus on people's welfare, not on how to rise to power. Otherwise, they will die out," said Ximenes.

Former president and CNRT leader, Kay Rala Xanana Gusmao, told thousands of supporters last week that under his leadership there have been many pro-poor programs.

Gusmao said his party has played a crucial role in preserving peace, unity and stability, which are fundamental cornerstones to ensuring the success of development.

"For the next five years, CNRT will focus more on improving the lives of small people, especially in rural areas, to create more job opportunities," he said.