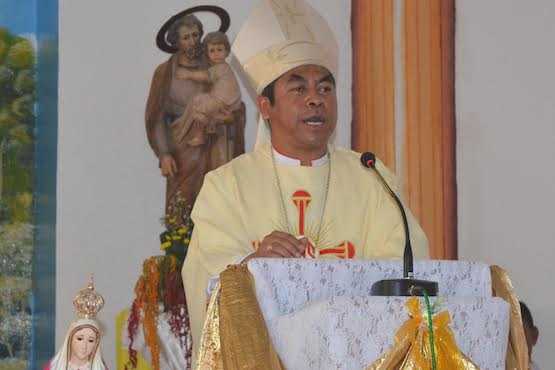 Bishop Virgilio do Carmo da Silva of Dili head the diocese that serves over a half-million Catholics. (Photo by Thomas Ora)

Salesian Bishop Virgilio do Carmo da Silva of Dili in Timor-Leste sees potential for a fourth diocese as the number of Catholics grows on the island nation.

Timor-Leste is Asia’s most Catholic country. With a population of 1.3 million, 97 percent — or about 1.26 million — are Catholics.

Bishop Virgilio, 49, suggested a possible time frame for a new diocese of four to five years.

This was because some parts of his existing diocese required further development.

Pope Francis appointed him as the new bishop of Dili on Jan. 30, 2016, after the post was vacant for about a year following the resignation of the late Bishop Alberto Ricardo da Silva.

Dili Diocese has only one minor and one major seminary, the latter run together with Baucau and Maliana dioceses.

However, the number of seminarians has continued to grow, with three or four new ordinations each year.

"We have 120 seminarians in the major seminary from all three dioceses," says Bishop Virgilio.

"The level of priestly perseverance is high, too," Bishop Virgilio said.

Still, a number of seminarians had left their studies and ended up working for government institutions and non-governmental organizations.

"Maybe the reason is the screening process itself," he says. A monument to Our Lady of Fatima by the sea just outside Dili. (Photo by Thomas Ora)

Building good relations with the government

Dili Diocese has sought good relations with the government.

The government had recognized the Catholic Church as a civil society group, said Bishop Virgilio, who studied philosophy and theology in Manila, the Philippines, which also has a Catholic majority.

The Catholic Church stood up against brutal occupation after the Indonesian military invaded in 1975 when longtime Portuguese colonial rule ended.

"So, they felt more like being part of the Catholic Church."

Formerly known as East Timor, it gained independence from Indonesia in 2002 following a 1999 United Nations-backed referendum. It was then renamed Timor-Leste.

"Now the government recognizes the Catholic Church as its partner in serving the people for development," Bishop Virgilio said.
At times of political tension, political leaders listen to the voice of the Church, he added.