Prominent figures seek favors to get their children admitted 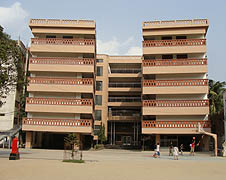 Students play on the grounds of a Church-run school in Dhaka
Share this article :

Renowned for their academic excellence, several Catholic schools in Dhaka archdiocese are facing serious pressure to meet demand. “Influential people including ministers, Member of Parliaments and bureaucrats gently press me to get their children or relatives admitted,” said Holy Cross brother Leo Pereira, principal of St. Joseph’s Higher Secondary School at Mohammadpur in Dhaka. “High profile people even call over the phone or sit here for hours. But we’ve no way to go beyond the admission rules,” he added. There were 1,400 applications for grade three with only 168 places available, Brother Pereira said. “We cannot afford to accept more than 13 percent of candidates,” he explained. Sister Mary Dipti of the Associates of Mary Queen of Apostles (SMRA) congregation said the Bottomley Girls’ Primary School, which she heads, faces the same problems. “There is lots of pushing for admittance. Sometimes we’re forced to allow one or two students to skip admission rules but we don’t like the pressing,” she lamented. The situation is similar at Our Lady of Fatima Rani Girls’ High School south-east of Dhaka. “People queue for the whole night to collect admission forms,” said Sister Mary Shikha from the same congregation. “This year we dispensed 1,000 forms for only 120 available seats.” “As soon as the admission test is over, guardians start nagging again,” she noted. Although there are also non-Church-run Dhaka schools in the top bracket, guardians and students show a clear preference for Catholic schools. “The environment and discipline of the school is important. Most schools in the city lack playgrounds and a large enough campus. Church-run schools have all these,” Brother Pereira said. Muslim housewife Hosne Ara Begum agreed. “Missionary schools provide quality education and emphasize extra-curricular activities. They also give lessons on character development and values,” commented Begum, who hopes to have her son admitted into St. Joseph’s Higher Secondary School. The Dhaka archdiocese operates three colleges, 20 high schools and 30 primary schools. BA12742.1635