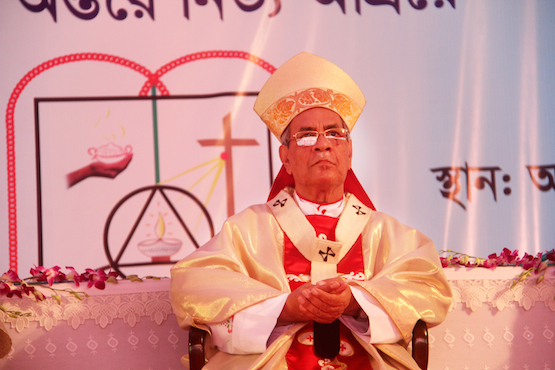 Cardinal Patrick D'Rozario of Dhaka has called for Bangladeshi Catholics "to turn away from revenge, hatred and undue judgments." (ucanews.com photo)

Cardinal Patrick D'Rozario of Dhaka has called for unity in a bid to heal a bitter rift that has gripped Bangladesh's Christian community following the controversial election of a major Christian cooperative board.

"It is sad and at times scandalous to many people to see the recent divisions and disunity with Christian communities living both in Bangladesh and abroad," Cardinal D'Rozario said an email message sent out to 25 Christian leaders this week.

The prelate was expressing his concerns over ongoing rift between two groups of Christian leaders stemming from a disputed board election for the Christian Cooperative Credit Union Ltd. of Dhaka, the country's largest cooperative with over 36,000 members.

The dispute revolved around some 200 selected voters, each representing 50 members casting votes, instead of a universal vote.

The unprecedented and unusual election sparked an outcry among ordinary Christians.

"Conflict of ideologies, of approaches and strategies, of leadership and interests, of power and positions … are seen in many Christian organizations and socio-economic institutions," Cardinal D'Rozario said in the email.

He said the ongoing dispute is threatening ordinary Christians.

Cardinal D'Rozario said his appeal for unity stems from the concerns of "simple people."

"Having listened to the voices of simple people, may I therefore, make an appeal to all concerned, to turn to the mercy and forgiveness of God; to turn away from revenge, hatred and undue judgments," he said.