Tourists begin to check in ahead of Philippines grand parade 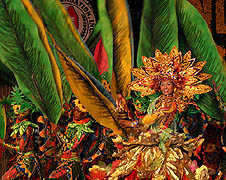 Contestants perform a number during the Sinulog festival (Photo courtesy of sinulog.ph)

Tourists and devotees of the Santo Niño or the Child Jesus have started arriving in the central Philippine province of Cebu to join the week-long religious celebration dubbed the "Sinulog." The festival will culminate on Jan. 16 with a grand parade through a 4.5km route across Cebu city, featuring festival giants, colorful floats and marching bands. A day before the grand parade, a 7km solemn procession in honor of the Child Jesus will highlight the end of the nine-day novena at the Basilica del Santo Niño. Other activities of the 10-day festival include the grand coronation night of the Miss Cebu pageant, the Cebu Pop Music Festival, trade fairs, a parade along the river, street parties and a short-film festival. The first batch of 32 "balikbayans" or returning Filipinos arrived at Mactan-Cebu International Airport last week, while 200 more are expected on Jan. 13, said Cinbeth Orellano of the Cebu City Tourism Commission. While tourists booked into hotels and resorts, the poorer devotees from nearby provinces have started setting up tents near the church of the Child Jesus at Fort San Pedro. Over a million devotees usually crowd the streets of Cebu during the religious procession and the grand Sinulog parade. Police said they expect a crowd of over two million people this year. The Sinulog is a traditional dance that natives of Cebu offer to their gods before Portuguese explorer Fernando de Magallanes or Ferdinand Magellan gifted the queen of Cebu the image of the Child Jesus when she was baptized a Christian. Related reports Security up in Cebu for feast of Child JesusCherished Filipino festival brings English town to standstillDevotees Pray To Santo Nino, Dance To Mark Feast Day PV12775.1636