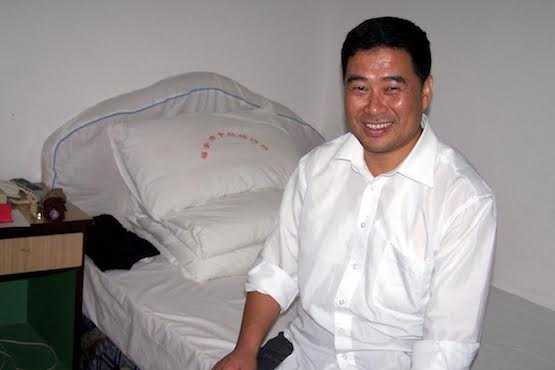 Bishop Vincent Guo Xijin of Mindong pictured when he was a priest while detained in a government-run hostel in China's Fuan city in 2006. (ucanews.com photo)

Bishop Vincent Guo Xijin of Mindong in China's eastern Fujian province has not returned after being forced to pay a visit to the religious affairs bureau in Fuan city on April 7, according to local sources.

Local Catholics said that the move was to prevent the new bishop from presiding over his first Chrism Mass: a symbol of unity for the clergy.

"The security bureau informed the diocese that the provincial religious affairs bureau asked him to attend a learning class for 20 days," said a priest who asked not to be named, adding that has not heard of any other underground bishop in the province needing to do the course.

"Without the bishop, the Chrism Mass is bound to fall through," he said, referring to the service that was planned for Holy Thursday April 13.

Another church source condemned the authorities for creating confusion. "How come they always make excuses to take the bishop away when a church feast needs his presence?" said the source.

According to church tradition, all the priests of a diocese gather with their bishop at the cathedral for the blessing of chrism and other holy oils used during the year on the Thursday before Easter. The Chrism Mass is thus a symbol for the unity of the clergy.

This year's Chrism Mass would be Bishop Guo's first following the death of his predecessor Bishop Vincent Huang Shoucheng on July 30, 2016. In the open church community of the same diocese, Bishop Vincent Zhan Xilu is one of the seven government-appointed bishops not recognized by the Vatican.

In the course of China-Vatican negotiations last year, the Holy See was reportedly willing to recognize only four bishops and Zhan was not one of them. The Vatican hesitated to recognize him as they had already appointed Bishop Guo.

In Hebei province, where there are nearly one million Catholics, Coadjutor Bishop Cui Tai of Xuanhua was spirited away by security officials from his sister's home around mid-February, two weeks after the Chinese New Year.

"Bishop Cui has been under repeated detention since 2008 and is only allowed to come home from house arrest twice a year for Chinese New Year and the Moon festival," a Hebei church source told ucanews.com on April 10.

"This is not due to leniency but because security officers also have to go home for the two festivals. After new year ends the officials take him back again. He is now probably being detained in a hostel somewhere," the source added.