The photo of detained Bishop Shao Zhuming of Wenzhou while in a Beijing hospital that went viral on social media. (Photo supplied)

An underground bishop disappeared by Chinese security officials has resurfaced in a Beijing hospital but it is unsure if he remains under state control.

Using a WeChat account, detained Bishop Shao Zhuming of Wenzhou in Zhejiang Province said he was in hospital to have ear surgery on Sept. 11.

Bishop Shao who was taken away from his diocese by security officials in April, urged people not to visit him but to keep him in their prayers.

"Many thanks for all who pray for me, especially for the smoothness of my surgery today," said Bishop Shao's WeChat account.

An earlier photo of the bishop dressed in pajamas and sitting on a bed in a hospital setting went viral on the internet beginning Sept. 8.

A church source told ucanews.com, the photo was taken at Beijing Tongren Hospital where the bishop was to have ear surgery.

The source was not able to confirm the bishop's status regarding if he remains under state control.

"He needs to take half year to recuperate after the surgery as there is something installed in his head," said the source who believed that the government will not take care of the bishop's post-surgery.

Bishop Shao was taken away by security officials a few days before Easter. It is the fourth time he has been detained since the Vatican confirmed him as Bishop of Wenzhou last September, following the death of his predecessor Bishop Vincent Zhu Weifang.

The government has urged Bishop Shao to join the Chinese Catholic Patriotic Association (CPA) — which would then lead to his being recognized by the authorities. The CPA advocates an independent church principle, which is incompatible to Catholic doctrine. 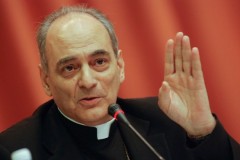 Vatican official hints at de-facto deal with China on bishops

Church media outside China reported that the authorities are also demanding Bishop Shao persuade the Vatican to appoint a priest in the open church community as his coadjutor bishop. The source said the government then wants the new coadjutor bishop to replace Bishop Shao.

The Vatican issued a statement on June 26, saying it was saddened with the situation of the disappearance of Bishop Shao. The German government also publicly expressed the hope that the bishop may be released.

The Chinese government spokesman, Lu Kang said the Vatican's statement was "not the reasonable and correct thing" to do. Lu said that China opposed any country using so-called individual cases to interfere in its internal affairs.

Not allowed to attend funeral

Though Bishop Shao could receive medical treatment, the government did not allow him to attend the funeral of Father Wang Zhongfa, an underground priest of Wenzhou, who died Sept. 2 aged 86.

Before Father Wang passed away, Bishop Shao was allowed to visit him in hospital under the supervision of religious officials.

Secret police also took away Father Paul Jiang Sunian, chancellor of the diocese, to prevent him from taking part in Father Wang's funeral. As a brother, Wang spent 12 years in labor camps in Inner Mongolia for his religious beliefs during the Mao years. After he was released during the late 1960s, he was still confined to Inner Mongolia for a further 20 years.

When he returned to his home village near the city of Wenzhou, southeastern Zhejiang province, he was 47-years-old. In 1980, he was ordained by Bishop Zhou Weidao of Shaanxi, and preached extensively. In 1990, he established the Sisters of Sacred Heart of Jesus in Wenzhou.