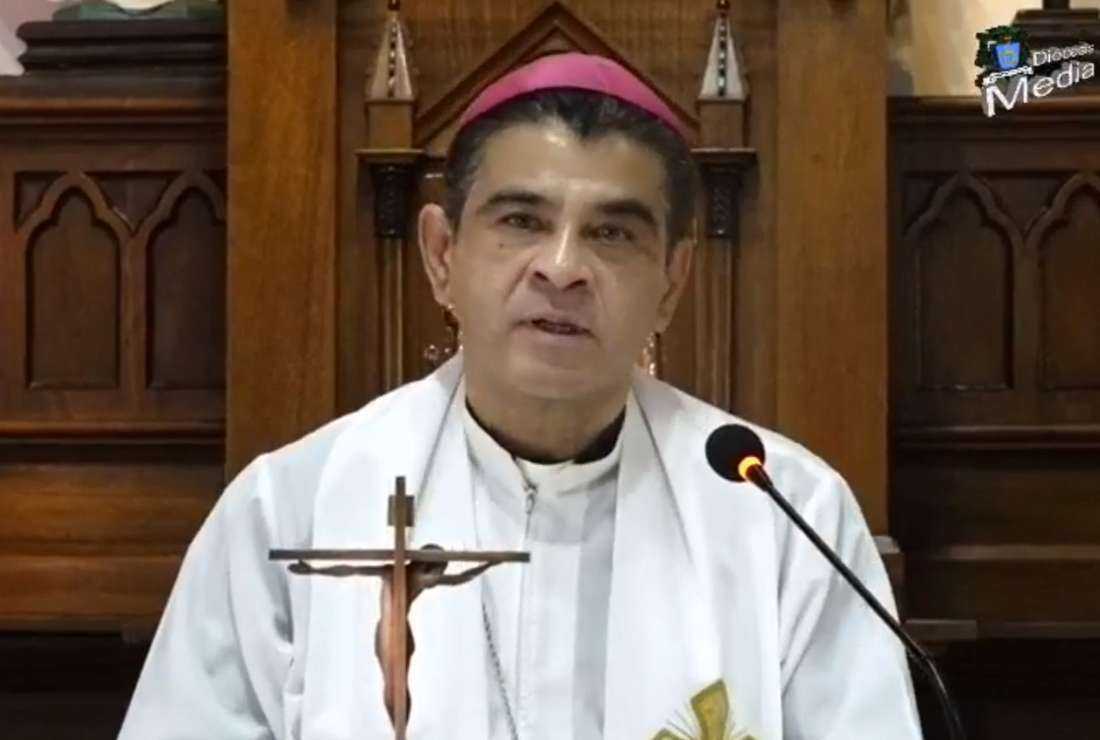 In this screen grab obtained from a handout live transmission of the Facebook page of Matagalpa's Diocese, Monsignor Rolando Alvarez speaks during a mass in Matagalpa, Nicaragua, on Aug. 5. (Photo: AFP)

Detained Nicaraguan Bishop Rolando José Álvarez appeared in a video Aug. 11, a week into his de facto house arrest by government authorities, saying that he and the companions who are with him have hearts full of forgiveness and love.

The video, taken inside a chapel of the church building where the group is being detained, is part homily, part update on the spirits of the priests and lay Catholics with the bishop. Police in riot gear has prevented all from leaving the building.

Some worry about whether food or medicine has been allowed in.

Their detention came after government officials shut down radio stations under the auspices of the Diocese of Matagalpa, in northern Nicaragua, where Bishop Álvarez serves.

The bishop has criticized the government for its repression of the populace. The government has accused the bishop of "organizing violent groups" and encouraging them "to carry out acts of hate against the population."

In the video, Bishop Álvarez mentions the day's Gospel, which "invites us to forgive up to 70 times seven," he said, in a likely reference to the group's captors and the situation they find themselves in.

The group's plight has caught the attention of human rights activist Bianca Jagger, a Catholic and native of Nicaragua.

On Aug. 11, she said she was making an urgent plea to Catholic leaders, particularly episcopal conferences worldwide: "Do not abandon Bishop Álvarez."

On Aug. 12, Auxiliary Bishop Silvio José Báez of Managua, who now lives in Miami after being forced to leave the country following death threats in 2019, condemned the government's actions via Twitter, calling the detention a "kidnapping."

"I am with him (in spirit) with my love and prayers," he said of his brother bishop. "He and those with him must be released!"

Meanwhile, the crackdown on Catholics continues in Nicaragua. In a letter, the Archdiocese of Managua said national police authorities suspended a procession and other religious events surrounding the feast of the Assumption, citing safety issues.

Instead, the archdiocese called for fasting and participation in prayer, the rosary, and Mass at the Cathedral of Managua Aug. 13 with Cardinal Leopoldo Brenes.