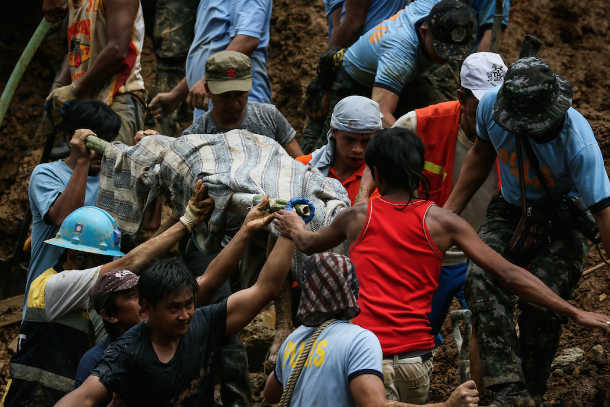 Rescuers continue search operations at a mine site in the northern Philippine town of Itogon where as many as 65 people were reported missing. Miners who stayed in an old bunkhouse were buried in mud after a mountain slope gave way in heavy rains on Sept. 15. (Photo by Jire Carreon)

Environmental activists have blamed mining operations for landslides that have reportedly killed dozens of people in the northern Philippines following a powerful typhoon at the weekend.

Conflicting reports from government agencies said at least 100 people could have been killed in a landslide in Itogon town in Benguet province.

Town officials said that at least 19 bodies were recovered as of Sept. 18, while 59 others were still missing.

Army spokesman Col. Louie Villanueva, however, said there were 39 fatalities while 65 others were feared buried under the mud.

However, Edgar Posadas, spokesman of the National Disaster Risk Reduction and Management Council, said the confirmed number of dead from the typhoon remained at eight, six of them in Itogon town. The other figures were subject to validation and confirmation, he said.

Anti-mining activist Jaybee Garganera said illegal mining activities, which have been tolerated by big mining companies, are to blame for the disaster.

He said that although Philippine mining giant, the Benguet Corporation, claimed it has stopped operations at its Itogon site "their contract is still live."

The mine was abandoned in 2009 after the government ordered a ban on all mining activities, but small-scale miners continued to operate in the area.

Miners who stayed in an old bunkhouse were buried in mud after a mountain slope collapsed due to heavy rains on Sept. 15.

Garganera said the mining sites in effect remain open, with illegal miners selling their ore to middlemen, who in turn were selling it to the original mining firm.

In the wake of the disaster, President Rodrigo Duterte admitted that he was helpless regarding problems posed by mining in the country.

"I cannot stop mining because I'm not allowed to abrogate any law here. But I want to stop it because it has created a monster," said the president in a media briefing on Sept. 18.

He said his economic advisers would not like the idea of closing down the mining industry as it generates about US$1.3 billion in earnings a year.

"A time must come when our motherland is overused and abused, and this cannot go on," said Duterte.

He said he would have to talk to congress in the coming days.

"I will really tell [legislators], 'We have to close the mining industry or better still plan a period and give Mother Earth a respite [from] the continued and endless digging,'" said the president.

Following Duterte's pronouncement, an infrastructure-oriented think-tank dared the president to make good on the statement.

"Unless the mining industry can undertake strict standards to prevent the loss of lives and environmental destruction, the sun should finally set on mining in the Philippines," said Terry Ridon, convenor of Infrawatch PH.

Ridon said the absence of strict regulations in the industry has caused numerous problems, including instances in which small-scale mining groups are undertaking large-scale operations.

Anti-mining activists said "responsible mining," which is the theme of an international mining conference in Manila this week, is a "myth."

"There is a long list of evidence and documentation that illustrate the violations and non-compliance of mining companies in their operations," said Garganera of the Alliance to Stop Mining.

The activist cited a book co-published by the social action arm of the Philippine bishops' conference that documented this.

Father Edwin Gariguez, executive secretary of Caritas Philippines, said copies of the book, Peoples Mine Audit: Documented violations and non-compliance of large-scale mining projects in the Philippines, will be distributed to diocesan centers all over the country.

"It is important that the destructive effects of mining will be shared to the people to show to affected communities that the whole country is also affected," said the priest.

Jimmy Domingo contributed to this report.