More than 120,000 Rohingya are confined to squalid camps in apartheid-like conditions 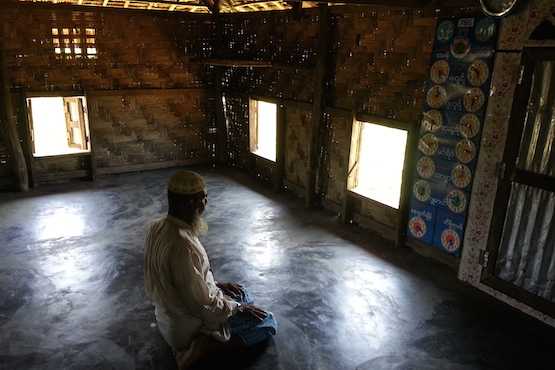 An elderly Rohingya Muslim in a makeshift place of worship in an internally displaced camp near Sittwe in October 2015. (ucanews.com photo by John Zaw)

More than 120,000 Rohingya have been confined to squalid camps in apartheid-like conditions in the state since violence erupted between Rakhine Buddhists and Rohingyas in 2012 that left scores dead.

Since then they have been denied citizenship, freedom of movement, health and education in Rakhine.

For Khin Mg Myint, Sittwe, it is his fourth year of fasting for Ramadan in Thetkaepyin camp for internally displaced people near Sittwe.

"Before 2012, we had our own business so we could share food to others," Khin Mg Myint told ucanews.com. "But now we have no jobs and we rely totally on aid from donors, so we can't share food to other needy people during Ramadan," he said.

Khin Mg Myint prays during Ramadan that they will be able to return to their respective homes and get equal rights.

He wants to live together with the Rakhines peacefully like they did prior to 2012, he said.

Kyaw Thein, a Muslim from a camp for internally displaced people in Myaebon township, said that most people do fasting and praying in a small room in the camp while others go to temporary worshipping centers.

"The atmosphere of praying and fasting in the mosques is different from the camp," Kyaw Thein who has also been in the camp since 2012.

Kyaw Thein got a national registration card in 2014 under a 1982 citizenship law but he has to accept being described as Bengali instead of Rohingya.

"We have no other option so we have to accept the Bengali term as we want to go home after getting a citizenship and have equal rights like other people in Myanmar," said Kyaw Thein, adding that he and 200 other Muslims received citizenship under a 2014 pilot project under the previous government led by of President Thein Sein.

The 200 Muslims, however, have remained in the camp, which they are prohibited from leaving.

Myanmar Buddhists refer to the Rohingyas as Bengalis, implying that they are illegal immigrants from neighboring Bangladesh despite vast numbers of them having lived in the country for decades.

A 1982 citizenship law stipulates that only ethnic nationalities, and others whose families entered the country before 1823, are entitled to Myanmar citizenship. Through the law the Rohingya's have been denied citizenship and accompanying rights.

U Furuk, a Rohingya from Dar Paing camp for internally displaced people near Sittwe, said he feels like a prisoner.

"We are guarded by security forces and live in small rooms in a temporary camp. So aren't in a happy mood to worship or do fasting during Ramadan," U Furuk told ucanews.com.

Anti-Muslim sentiment has been emerged since 2012 violence in Rakhine spearheaded by hard-line Buddhist monks from the Committee of the Protection of Race and Religion, known as Ma Ba Tha. The hard-line monks have recently called on a new civilian-led government to protect Buddhism, the main religion of the country, and stick to a 1982 citizenship law.

Aung San Suu Kyi, the country's de facto leader, has in the past been criticized for her silence on the Rohingya issue and for her lack of details on how the new government will protect the rights of the Muslim minority.