Only 14 are currently enrolled in higher education 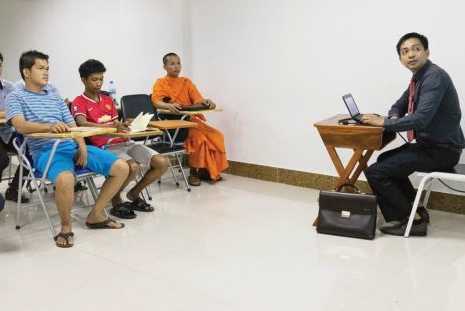 By Harriet Fitch Little for the Phnom Penh Post

Hob Engchoug is impatient to graduate. At 28, he is significantly older than most of the students he sees every day at Asia Euro University — a glaringly new, orange-mirrored tower block just off Kampuchea Krom Boulevard.

Engchoug was born deaf, and as a child his mother was unwilling to send him to school for fear he would be mocked or misunderstood. Now he is in his fourth year pursuing an IT degree, and on track to graduate in October 2015. “When Krousar Thmey contacted my parents [about university], they were very surprised and happy — they did not think that deaf people could go to university,” he recalls.

Until recently, his parents would have been right. The first school catering to deaf students in Cambodia was opened by Krousar Thmey in 1997 — a decade after Engchoug was born. It was only in 2006 that they issued the first high-school diplomas.

In the years since, the number of young, educated graduates looking to make good on those diplomas has started to grow.

There are currently 14 deaf students in higher education in Cambodia. Asia Euro remains the only university to have signed an agreement with Krousar Thmey to accept their students, and Engchoug is on the same final-year program as two former classmates — Ngin Soma and Vong Sopheak — while others are taking classes in the years below. In addition, a former Krousar Thmey student is currently in his fourth year of independent study in the architecture faculty at Norton University.

Another promising architecture undergraduate at Norton, Kiry Danh, was killed in a traffic accident last month. He was in his fifth year.

To date, only one deaf student has completed university. Sreng Vanny graduated from Asia Euro in 2013 and is now a teacher at Krousar Thmey.

Aep Chanveasna, the academic and career counseling coordinator at Krousar Thmey, says that there are many deaf students who have passed their grade 12 exams and want to go on to higher education but can’t, because the placement system has reached a bottleneck. “Only a limited number of universities accept our students,” he explains.

Although Cambodia has antidiscrimination laws in place that make it ostensibly illegal for institutions to discriminate based on physical disabilities, Krousar Thmey does not believe in an antagonistic approach. Instead, Chanveasna focuses on organizing talks and exhibitions for educators aimed at showcasing the abilities of deaf and blind students (who the school also caters to).

“Students and professors are really interested in deaf and blind education, and it [always] sounds like they never heard about it before,” he says of these encounters. “They are surprised to see a deaf student standing there and explaining in sign language.”

Erin Moriarty is a researcher into the deaf community in Cambodia who is herself deaf. She agrees that the “softly softly” approach makes sense. “In the United States, public advocacy and legislative action has been used to advance accessibility, but the Cambodian context is different,” she says.

“Patronage systems of loyalty and Theravada Buddhism are some of the forces that shape political and social practices. Working within these systems seems to be the strategy Krousar Thmey is using to advocate for its students, and it seems to be effective.”

For all the advocacy, the transition to a mainstream classroom has not been an easy one for students educated via sign language to make.

In the first and second year of their degree, Engchoug, Soma and Sopheak worked with an interpreter provided by Krousar Thmey, but they have completed the second half of their degree alone.

Sun Setha, dean of the Faculty of Science and Technology, insists that it was at the pupils’ request. “They said that they want to do it by themselves,” he says, adding that there is a clear MoU with Krousar Thmey that allows for an interpreter to sit with deaf pupils in class.

Soma, 26, counters that it happened when their class hours became less regular, and they were split up into different groups. “We prefer to have the interpreter with us because it is easier to communicate,” she says. “Right now, I am doing my thesis, and if there was someone who could explain to me in sign language, that would be better.”

“I’m always alone,” she adds. “When I enter the class, I sit with my friend who cannot communicate with me in sign language. She tries to write stuff for me to read but the teacher doesn’t care and just starts the class using talking to explain, so it is difficult.”

When Soma finishes university, she wants to become a teacher for deaf students. “If I can work with deaf children I will be happy and I will never get bored,” she says.

Engchoug describes university life as “not so bad, not so good.”

“I feel happy when other students can communicate with me in sign language, but most of the time I don’t feel good because hearing people just communicate with each other and don’t care about me at all,” he says.

Once he graduates, Engchoug hopes to expand on his current work with the Maryknoll Deaf Development Programme — an NGO that works to empower deaf people in Cambodia, in particular by continuing to advance Cambodian Sign Language’s usage and vocabulary.

Of the three finalists, only Sopheak, 25, wants to pursue opportunities related to his degree. He hopes to travel to America to continue his studies with other deaf pupils. If that’s not possible, he says, he will open a computer repair shop.

Krousar Thmey currently has more blind than deaf former pupils in higher education, a fact that Chanveasna believes is a result of the two groups’ different levels of ability.

“Blind students are more clever compared to the deaf students,” he says. “They use more brain, they are more intelligent, they have to be smart.

“But the deaf, they are more manual. They get used to it from the beginning [through] seeing sign language and watching people do things. They don’t use so much brain, they just follow what they see. That’s why blind students can study higher than deaf students.”

Chanveasna puts the difference in educational attainment down to the fact that the blind pupils are more able to access nuance. “They catch faster because everything goes through explanation,” he says.

Moriarty disagrees. “The issue is not intelligence or the ability to learn, the issue is the modality of education,” she says. “Deaf children don’t have access to a structured, formal language until they meet a native CSL [Cambodian Sign Language] user or arrive at school, and even then, if the teachers or interpreters are not fluent in CSL, it is very difficult to transmit knowledge and learning.

“Imagine what it must be like learning about chemistry or the reproductive system from a non-native signer — it is like a British student in a classroom with a teacher who just arrived from France and has very basic, primary-school English.”

Cambodian Sign Language is still an extremely young system of communication. Indeed, when Krousar Thmey’s founder, Benoit Duchateau-Arminjon, first opened the school to deaf pupils, it didn’t even exist and, for a while, he took the controversial path of educating pupils in American Sign Language instead. Even now that the language has developed in complexity, some in the community feel that teaching needs to improve if students are to have much hope of scholastic success.

Heng Dina dropped out of Krousar Thmey in 2008, after eight years in the system. There were many reasons behind her decision not to continue: homesickness, the cost of living in Phnom Penh and — like many in her cohort who started school late — a frustration with the fact that she was 20 years old and studying in Grade 10.

But she also felt restricted by the teaching she was receiving. “The good teachers quit and the new teachers didn’t sign well, so I decided to go back home to help my family,” she says.

“I wanted to learn more advanced Khmer, but when I asked questions, they kept saying, hold up, wait, and didn’t answer my questions.”

Dina says she was not alone in making the decision to leave. “The hearing teachers all talked, and we didn’t really interact with them. We felt like they didn’t like us,” she explains, highlighting the importance of deaf students being taught by those fluent in CSL.

But she is nonetheless proud of the graduates who have made it work. “I am sad that Danh died. He was going to university and not many people have that opportunity,” she says. “I want to see deaf people with more knowledge,” she adds, using a sign that also means “growing consciousness” and “more ideas”.

Moriarty agrees that the existence of deaf university graduates — albeit in small numbers as of now — is an exciting step, and one that can only have positive consequences for the younger students being educated at Krousar Thmey, which now even includes pre-schoolers. “If more parents knew their deaf children could go to university and become ‘white collar’ professionals, they may be more willing to invest in their deaf children’s education by sending them to school.”