Despite hate-mongering, church 'must stay out of politics' 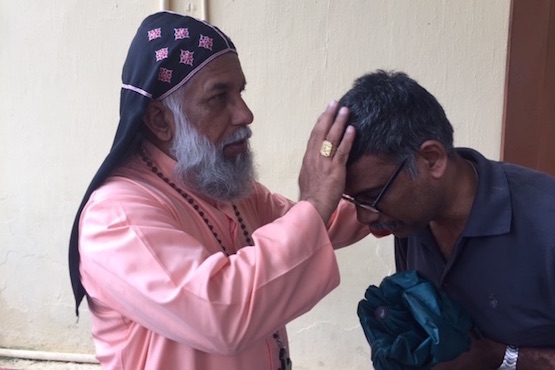 Cardinal Baselios Cleemis praying over a man from his Syro-Malankara rite in his parish in Adoor, Kerala on Sept. 17, 2017. (photo ucanews.com)

He said hate-mongering political ideologies and crimes that target Christians in India are best countered when Christians live out their faith heroically.

The cardinal, 58, said a minority of Hindus are aggressively opposed to other religious communities. "They take aggressive steps to curtail the freedom of other religions. That is something very, very alarming," said Cardinal Cleemis of the eastern rite Syro-Malankara Church.

He is the youngest Indian cardinal, and well known for his traditional views on church teachings. Cardinal Cleemis said while India was underpinned by a culture of diversity and acceptance, a new way of thinking was emerging. He said Hindu-nationalist ideology had no popular acceptance in the country.

Christian leaders have accused hardline Hindu groups of targeting Christians after the pro-Hindu Bharatiya Janata Party (BJP) came to power in 2014 in a landslide victory. These groups, who consider BJP their political wing, took the electoral victory as a mandate to accelerate turning India, which under the constitution is secular, into a Hindu nation.

Christians, who make up only 2.3 percent of India’s 1.2 billion population, cannot change the development, the cardinal said.

"In a democracy, what matters is the number of votes. The Christian community, because of its feeble numbers, can never become a political force."

Cardinal Cleemis said despite being a minority, Christians had lived freely in India since apostolic times because of the country's secular attitude and the protection of the Lord.

He said when considering political action, Christians should weigh up whether it is an "appendix to our socio-political life" or "something that guides our life?"

"We should not give the place of Jesus to politics and political leaders," said the cardinal. The Cardinal is based in Kerala and has had dealings with communist party leaders. He said though numerically small, Christians should exercise their political rights and work with others to sustain the secular qualities of the nation.

The increasing attacks on Christians, especially after BJP came to power, are "signs of much deeper issues … of growing hatred and a particular way of thinking about one’s own religion," said the cardinal without naming any Hindu group.

He said in recent years, Christian communities such as those in eastern Odisha State had been targeted because of their faith. In 2008, remote Christian communities in the state were attacked by Hindu nationalist who killed 100 people and burned hundreds of churches and homes. "Christians were challenged, made to walk naked on the streets, beaten up, butchered and burnt alive. Now we see signs of faith growing in these places. As a faith community we have a protection that is beyond all human protections."

Cardinal Cleemis said this doesn’t mean Christians should ignore attacks and continue to suffer. Advocacy, lobbying and forming alliances are all important to ensure freedom and safety.

He said more Christians should get involved in politics to strengthen the secular democratic systems. "We also need to challenge those aggressive models that proposes one-religion and one-culture for all Indians," the cardinal said.

Despite BJP's efforts to woo voters in Christian-stronghold states pockets, the cardinal said the Church cannot become involved in party politics too. “It is up to Christian political leaders to make their decisions, upholding their faith values and the interests of the community. The hierarchy has no role in party politics," he said.

The Church in India had to lead people to political maturity by raising general awareness  about the democratic process .

However, the Church would not set up roadmaps and action plans to install or unseat political parties. "If we do such things, how are we different from a political party? Then we will cease to be the Catholic Church," said Cardinal Cleemis.