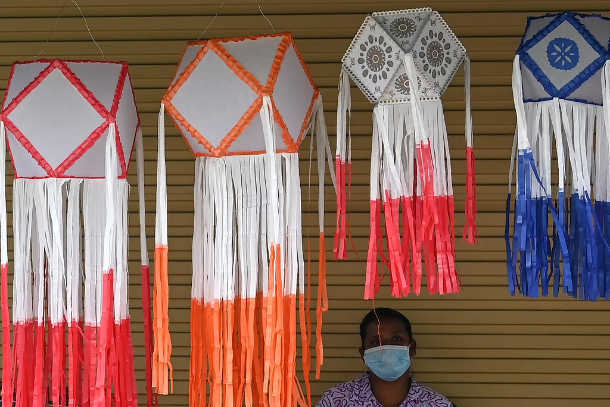 A street vendor wearing a face mask sells lanterns in Colombo on May 2 ahead of the Vesak festival which marks the birth, enlightenment and passing away into nirvana of the Lord Buddha. (Photo: Lakruwan Wanniarachichi/AFP)

Despite the curfew imposed due to the coronavirus pandemic, Sri Lankan Buddhists are getting ready to celebrate the Vesak festival, which commemorates the birth, enlightenment and death of the Lord Buddha.

But this year will be very different. The festival on May 7 and 8 will be mainly celebrated in homes after the curfew in high-risk districts was extended until May 11.

Ruvini Attapattu, 57, from Pannala said there are fewer shops with decorations including Vesak lanterns this time.

Despite the challenges, people are still motivated to create Vesak decorations for the festival, which coincides with the full moon each May.

"The Vesak season brightens the pandals [structures showing Buddhist tales] but there are no pandals this year," said Attapattu.

Buddhist monks have been urged to avoid unauthorized activities outside homes on Vesak Day on May 7 as well as to avoid holding public gatherings including Vesak zones, dansal (almgiving stalls) and pandals.

The monks at Pannala temple have asked the faithful to make lanterns in their homes and to avoid using polythene materials.

Christians are also joining Buddhists to mark the Vesak festival. "Some Christians have decorated their churches and houses with paper lanterns and flags," Attapattu said.

Chief Buddhist monks and the Department of Buddhist Affairs declared National Vesak Week from May 4-8 and instructed devotees to get involved in programs from home.

The Ministry of Health and Indigenous Medicine has issued instructions to all Buddhist monks on how to observe this year's festival to stem the spread of Covid-19 in the country.

The ministry said that Vesak Zones, dansal, pandals and all public gatherings should be avoided.

Ruwan Chamila, a mother of two, said in the past she and her neighbors would go to the temple early in the morning and chant with their children.

"They would spend the entire day in temples, dressed in white robes and observing Seela [good habits and virtues]. Devotees would bring flowers and clay lamps to light in front of the Lord Buddha," said Chamila, a Buddhist devotee who married a Christian.

Devotees are expected to listen to the teachings preached by Buddhist monks at village temples. The Vesak celebration also means trying to bring happiness to the elderly, the disabled and the sick.

"Devotees and others are also ordered to eat vegetarian food during this season. All liquor shops, slaughterhouses and meat stalls will be closed during the two days by government order," Chamila said.

They try to observe the five precepts of Pancha Seela. "They are respect for the life of all living beings, not to steal, avoid sexual misconduct, respect for honesty in word and deed, and keeping away from alcohol and drugs," Chamila said.

Attapattu said many Dasa Sil Mata (ordained laywomen) can be seen at temples during the festival.

"At least if we can organize Pirith chanting and preaching programs using loudspeakers and sound systems while maintaining social distance, then our hearts can be filled with peace even during this coronavirus epidemic," she said.

Covid-19 cases have risen to 751 with seven deaths, while 184 patients have fully recovered and 176 are under observation in hospitals, according to the latest data.