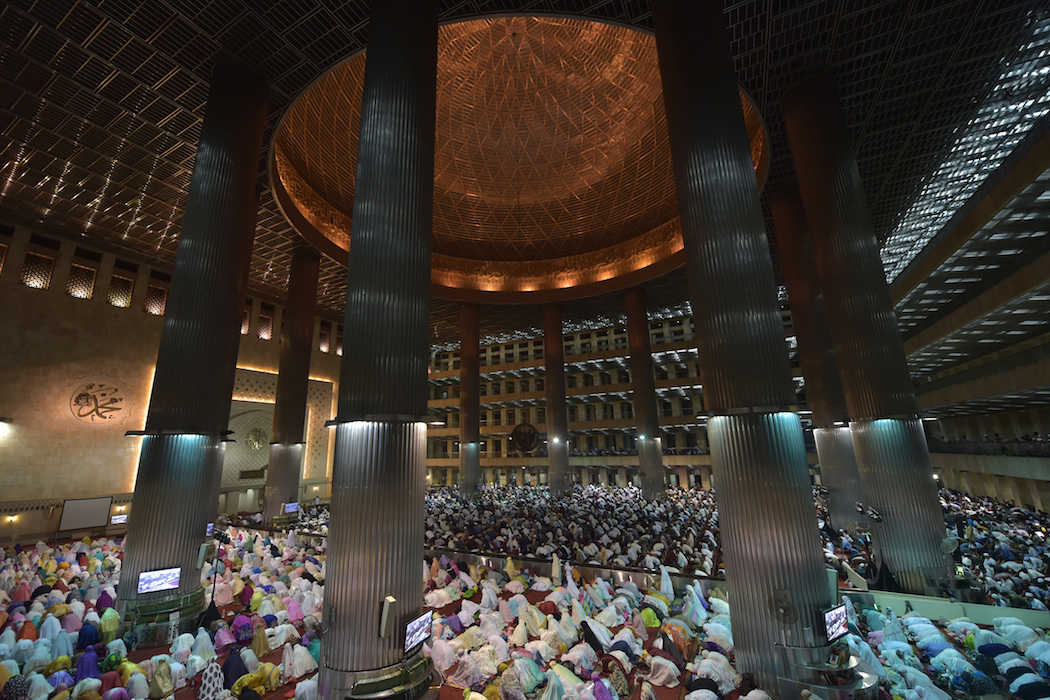 Indonesian Muslim people pray during the first night of Ramadan at Istiqlal Mosque in Jakarta in this May 16 photo. Indonesia is looking to lead the way in the Muslim world, despite recent attacks, in promoting a moderate form of Islam. (Photo by Adek Berry/AFP)

Suicide bombers struck again in Indonesia earlier this month, but the country pushed on with an exercise in soft power, promoting the essentially moderate and tolerant variety of Islam for which it is known, and which the bombers were forcefully rejecting.

Attacks on churches and a police station in the nation's second city, Surabaya, claimed a total of at least 25 lives. There was particular concern that the bombers were entire families — husbands, wives and children as young as eight.

The attacks followed a riot by terrorist prisoners and a 36-hour hostage drama at the Police Mobile Brigade headquarters in Depok, near Jakarta, a week earlier in which five police officers and one terrorist inmate were killed.

But while the mounting death toll brought a stark reminder that jihadist fanaticism is alive and well in Indonesia, the government and major Muslim organizations were involved in initiatives to promote a very different style of Islam, in the hope of influencing the wider global community and spreading the word that Islam is not a religion of violence.

The Indonesian actors behind the push were supported by allies in the form of two leading figures, the Great Imam of the Al Azhar Mosque in Cairo, Ahman Muhammad Ath-Thayeb, and Syekh Dr. Sholeh bin Abdullah bin Khumaid, the Imam of Mecca's Haram Mosque.

The presence of these leading theologians at what was titled the High-Level Consultation of the World's Muslim Scholars (HLC-WMS) from May 1-3 gave significant weight to the attempt to promote wasatiyyat Islam — Arabic for "Islamic middle way" — as a global movement to challenge extreme interpretations of the faith.

President Joko Widodo, opening the conference, stated that, "we wish to demonstrate to the world that Islam is a religion that is a blessing to all creation." Such a religion needed to be down to earth and be capable of inspiring leaders, religious teachers, youth and other groups, he said.

Din Syamsuddin, a prominent Muslim leader and the special envoy of Widodo for dialogue and cooperation between religions and civilizations, said the meeting was tasked with promoting a moderate form of Islam that was relevant to the current critical state of the world.

"We hope to achieve a level of intellectual legitimacy for the thought of Indonesia and for the position of Indonesia in contributing the forms of Islam wasatiyyat. One of many aspects of this country is the culture of consultation."

Al Azhar's Thayeb said it was hoped the meeting would produce a working framework to promote "middle-way" Islam to all members of the faith. Such a framework was required in order for all members of the Muslim faith to adopt moderate forms of the religion, for which there was a pressing need.

As if predicting the bombings that were soon to follow in Surabaya, Thayeb said he was saddened by the number of people who insisted that only they were right, a position that endangered relations between groups. "They consider members of other groups to be kafir [unbelievers]. This has never happened before," he said.

In a separate dialogue at the headquarters of Nahdlatul Ulama (NU) on May 2, Thayeb again repeated his conviction that "middle-way" Islam was an antidote for the divisive state of the religion at the moment, where social media had accentuated differences and sparked hatred.

"There are many groups within Islam. Don't fight together or accuse other people of being kafir or insist that you are right and everyone else is wrong to the point that it is halal to kill you. The reason why Muslims are killing each other is their stupidity in understanding Islam," he stated.

The Haram Mosque's Sholeh bin Abdullah, the special representative of Saudi King Salman to the conference, stressed in a visit to the NU headquarters that moderate Islam was that taught by the Prophet Muhammad.

"Its characteristics are the choice of the right words, peacefulness and avoidance of violence. There are a number of groups that prioritize violence but there are very few in Saudi Arabia," he said, adding however that because they made more noise, they tended to drown out the majority of moderate followers of the faith.

The government followed that success with a new round of peace talks on Afghanistan starting on May 11, with some 60 religious leaders coming from both the embattled South Asian state and neighboring Pakistan.

While the Taliban has said it does not recognize the talks, they added to pressure for a peaceful solution to the long-running war, with Jakarta insisting that the ulemas carry significant weight in determining the direction of the Afghan conflict.

"Middle-way" Islam represents the third incarnation of a series of moves by Indonesian scholars to contest radical interpretations of the faith. Beginning with Islam Nusantara (Islam of the archipelago) that morphed in just a few years into "humanitarian" Islam and now into its new form.

The changes in name to some degree reflect initial confusion that Indonesian scholars were trying to export Indonesian cultural forms of the religion, when what they were saying was that Islam should be allowed to reflect the predominant culture wherever it was.

Under whatever name, this reflects a direct challenge to the Salafi view of Islam as a religion fixed in stone that must keep strictly to the Quran and the teachings of the Prophet Muhammad.

In the Indonesian context, it also opposes the increasing "Arabization" of society and defends the right of Indonesian Muslims to maintain their traditional styles of dress and behavior. "Islam is not identical with being Arabic," former NU head and then president of Indonesia the late Abdurrahman Wahid is reputed to have stated.

Indonesia's efforts to promote its credentials as a model for other Muslim states will not produce results overnight. Traditionally its scholars have been seen as lightweight compared to those from Cairo and Baghdad.

The government's support for the "middle-way" initiative, though, shows it is keen to develop the soft power that many believe it deserves as a rising economy that is home to the world's largest Muslim community.

Keith Loveard is a Jakarta-based journalist who regularly writes for ucanews.com