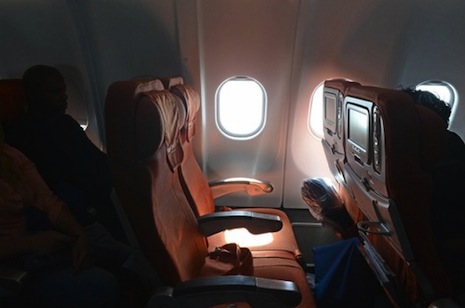 Snowden did not take the seat, 17A, which was reserved for his flight to Havana (Picture: BBC News)

From the outside, the life of a foreign correspondent might sometimes seem insufferably glamorous.

But the hunt for Edward Snowden is one of those assignments where the limited glamour of Havana and Caracas airports on a Monday night have been vastly outweighed by economy-class legs and sleep deprivation.

The news that Edward Snowden had chosen to add further mystery to one of the great intelligence stories of our time - by paying a visit to America's old enemy Russia - had broken during a rare quiet Sunday for the Moscow press corps.

By mid-afternoon we were all assembled at Sheremetyevo Airport, where information was surprisingly forthcoming. Aeroflot employees confirmed that Edward Snowden had arrived in Moscow from Hong Kong.

So, more in hope than expectation, we gathered in the arrivals hall of Terminal F. We were not optimistic. Surely he would only make a brief transit stop in Moscow? He would not want to be accused of selling secrets to Russia, would he?

That evening the Ecuadorean ambassador to Moscow showed up at the airport and asked us where Edward Snowden might be. Our frustrated reply: "We assumed you knew!"