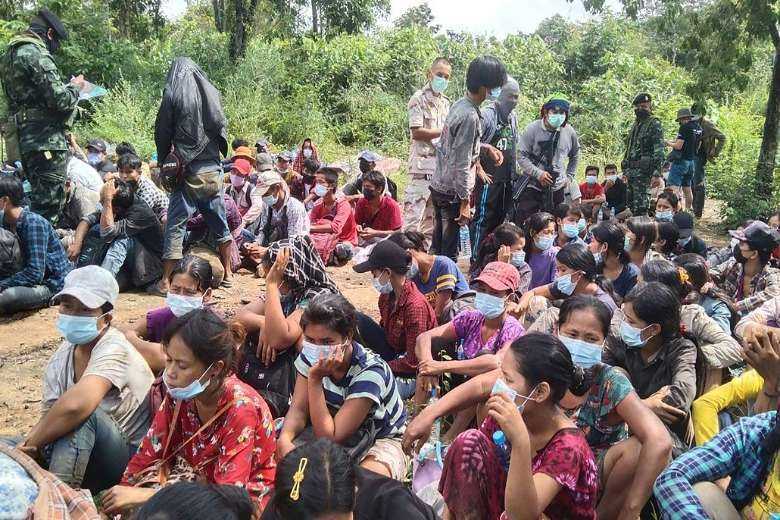 Thousands of desperate, economically disadvantaged migrants from Myanmar are flocking into Thailand every month in search of work.

Along Thailand’s northern border with Myanmar, 250 migrants were arrested last month together with eight Thai guides who had helped them cross illegally into the country, according to local authorities.

However, it is likely that the number of migrants crossing the porous border illegally in October along that stretch of the border was much higher as many of them managed to evade Thai border patrols undetected.

Smuggling networks continue operating in Thailand’s northern and western border regions, helping migrants from Myanmar to cross into Thailand where migrant workers, predominantly from Myanmar, Cambodia and Laos, make up a large share of the workforce in key industries such as manufacturing, food processing, agriculture and fishing.

Along the country’s western borders with Myanmar as well, migrants desperate for work have been entering Thailand illegally, with several hundred, both men and women, detained last month.

“The situation in my country is very bad,” Win Htet Kyaw, a migrant worker from Myanmar who works at a shopping mall in Bangkok selling mobile phones at a small stand, told UCA News.

Although Thailand’s economy has also fallen on hard times during the pandemic, it has remained relatively robust compared to its western neighbor

“Many people want to get out and live elsewhere,” added the migrant worker, who has been in Thailand since 2017. “Everything in Myanmar is getting much worse [under the current junta].”

Since a military coup in February, Myanmar’s economy has deteriorated further in tandem with a severe downturn prompted by the Covid-19 pandemic.

Although Thailand’s economy has also fallen on hard times during the pandemic, it has remained relatively robust compared to its western neighbor.

Experts say that for the foreseeable future large numbers of people from war-torn and economically deprived Myanmar will be trying their luck in Thailand by working in low-paying jobs.

Last year Thailand officially had some 1 million migrant workers from Myanmar, according to the Ministry of Labor, although many more undocumented workers were likely employed illegally.

However, despite the promise of jobs in Thailand, many migrants from Myanmar and other countries end up being exploited, especially those that are undocumented and work in notoriously exploitative sectors such as food processing and fishing.

Migrant workers are routinely required to work up to 16 hours a day for wages well below the Thai national average, while work conditions are often hazardous and unhygienic.

“More and more, the rights of Myanmar workers in Thailand are being violated,” Ko Ye Min, a spokesperson for the group Aid Alliance Committee for Myanmar Workers, told Myanmar Times.

“Even workers who have employment contracts have not been spared. The violations have worsened since the pandemic began causing Thai companies financial problems.”