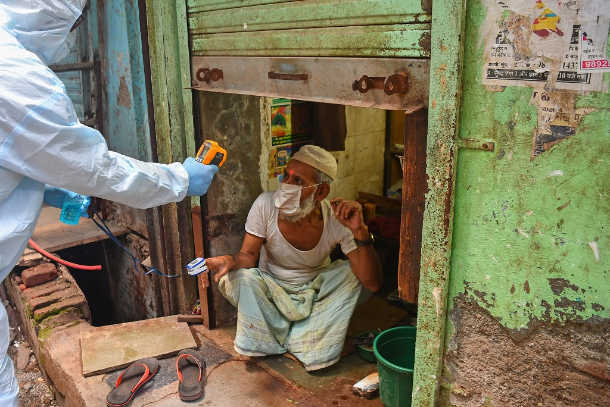 Medical staff take the temperature of a man as they conduct door-to-door medical screening in Dharavi slum in Mumbai on June 24 to fight the spread of the coronavirus. (Photo: Indranil Mukherjee/AFP)

Two Catholic priests have reportedly committed suicide in India in the past week as experts point to increased depression and loneliness in the country amid lockdown restrictions to stem the Covid-19 pandemic.

Nationwide lockdown measures that began on March 25 continue in different forms, including bans on public gatherings, socialization and public religious activities such as community rituals.

Between March 19 and May 2, at least 338 people committed suicide in India. All cases were related to the lockdown, according to data published by researchers.

The latest incidents that shook the Catholic Church in India were the apparent suicides of two priests and a novice nun.

The body of 51-year-old Father George Ettupara was found in a well close to his parish in Kerala's Changanacherry Diocese on June 22.

Father Yeruva Bala Shoury Reddy, 50, was found hanging from the ceiling fan of his bedroom inside his parish house in Guntur Diocese in Andhra Pradesh on June 20.

In another suspected suicide, the body of 21-year-old student nun Divya John was found in the well of her convent in Pathanamthitta district of Kerala on May 7.

Health experts and psychologists say India has become a breeding ground for increased depression, chronic stress, alcoholism and a tendency to self-harm.

Post-Covid India will be a hub of self-pity, alcoholism, gender-based violence and mass unemployment. All these could lead to higher suicide rates, says Guwahati-based educationist Joon Moni Borah.

"Gross poverty is never the cause of suicides in India. Suicide has more to do with mental agony and self-pity," she says.

India may be facing a situation similar to that of the US and Europe in 2008 when the London School of Hygiene and Tropical Medicine reported an extra 10,000 suicides due to the financial crisis, she adds.

Suicide rates in India remain high, with at least 15 people committing suicide each day, according to government data. In 2018, India reported 134,516 suicides, accounting for 17.5 percent of the 900,000 people who killed themselves globally.

The pro-Hindu Bharatiya Janata Party (BJP) has taken note of the issue and considers the increasing suicides, particularly of the young generation, a "social burden."

"At least 70 percent of suicides in India are by people below 45 years old and imposes a huge social burden. This needs to be looked into," says BJP leader Virendra Sachdeva of the government's Good Governance Cell.

Data shows that 38 percent of suicides in India are by those below the age of 30.

The lockdown, stress and lack of social activities have increased suicides in India, report local media while recording a spate of suicides including a popular Hindi film star.

Bollywood star Sushant Singh Rajput, 34, was found dead on June 14 in his Mumbai home. A 35-year-old female teacher jumped from the 17th floor of a high-rise building on April 25 in Nodia, a satellite town of New Delhi. In another case, a 55-year-old coronavirus patient, who was undergoing treatment in Haryana, hanged himself in a bathroom.

"Thanks to Covid-19 and the lockdown, as figures of corona patients keep increasing abnormally, apparently no one is happy in India today," says Ashie Singh, a Kolkata-based student.

Social worker Bishnu Bhattacharya says authorities and social workers should "get their act together" and try to take some corrective steps.

"Self-pity and the final act to destroy oneself could become the order of the day in India among vulnerable, depressed people as Covid-19 will have a colossal impact on people's lifestyle and livelihoods," he says.

Bhattacharya notes that India's social system was already stressed out in a "post-globalized India of nuclear families.”

"By temperament, Indians tend to be guided by the norms of an extended family in which brothers live together or nearby with their parents, wives and children. That provides support for all, and children grow up blessed with their grandparents' presence," he says.

But the breakdown of the joint family system "has vanished emotional support and stability in people's minds. Probably, actor Sushant Singh could have survived had he lived in his traditional family atmosphere" in his Bihar home, says Bhattacharya.

Joon Moni Borah says economic stress and social status issues are also factors in suicide. According to her, loss of jobs, lack of financial security and huge disparities in income all push people to take their own lives.

However, Capuchin Father Xavier Vadakkekara, a family counselor, says people's mistaken concepts of success and an inability to understand the meaning of failure are the real reasons.

"Many blame formation for suicide, particularly in the cases of priests and nuns. But actual formation happens in families, in childhood. Children should learn to face failure and disappointment in families. That will help them to face life as adults," he says.

"Religious formation that happens after teenage years can hardly change the core of the personality. Modernization and liberalization have changed the socioeconomic order, with severe competition in every field. Even siblings and husband and wife compete, not to speak of the professional world."

Father Maria Charles, who heads the Indian bishops' commission for education, says the crisis generated by Covid-19 has added to the problems.

"It is true that people often do not have faith in God, and it is slowly leading them not to have faith in other human beings. They become more individualistic and lose family support and so on," he says.

"Many regard money as the ultimate value. They thought money could get them anything, manage everything, and get away with anything. But then they suddenly find no money, friends or someone they can even talk to."

Some church bodies and institutions are already providing counseling to help students, but there is a need for more free online counseling service centers, Father Charles says.