Democracy campaigner Joshua Wong speaks during a press conference upon his arrival at the international airport in Hong Kong on Oct. 5 after being deported from Thailand. (Photo by AFP)

Wong, a leader of 2014's anti-Beijing Umbrella Revolution, was due to speak about his campaign for democracy at Chulalongkorn University, one of a handful of Thailand's globally competitive tertiary institutions, to mark the 40th anniversary of a student massacre there in 1976.

That the 19-year-old's invitation to the university has come from Thai student activists who are themselves under pressure from the increasingly repressive ruling military junta would appear to have made the decision by Thailand for its own interest.

Thai activist, Netiwat Choypatpaisal, left stranded waiting for Wong at Suvarnabuni Airport for four hours early on Oct. 5, was refused permission to see his guest. After a 12-hour detention, Thai authorities deported Wong back to Hong Kong where he arrived in the afternoon that same day.

The move is a sign both of Thailand's notable shift towards Beijing as well as China's growing influence in an increasing number of Southeast Asian nations and the ruling Communist Party's tightening its grip on Hong Kong.

What happened to Wong is the latest of a fast-growing list of examples of the Thai government acquiescing to Chinese requests, or seeming to turn a blind eye to extra-legal extraditions.

A string of incidents have occurred that all involve individuals considered dissidents by Beijing. The first signs of the new found cosiness was a decision last year to repatriate more than 100 Muslim ethnic Uighurs from Thailand back to China.

Thailand has long been a target destination for refugees from the Uighur homeland in China's northwest province of Xinjiang via a number of well-worn people smuggling routes.

Wong is the latest individual from Hong Kong to have his movements dictated by the mainland. Last year, Gui Minhai, a Hong Kong born Swedish citizen, was effectively kidnapped from his home in the beach resort area of Pattaya and spirited away. He later appeared, like four of his colleagues from a Hong Kong publishing house, in custody in China.

In the same year, another Chinese activist Li Xun, arrived in Thailand claiming political asylum but disappeared whilst travelling to neighboring Laos as Bangkok sat on his application for refuge. There have been other media reports of Chinese citizens who have disappeared from Thailand. Christians back HK democracy protests with food and faith 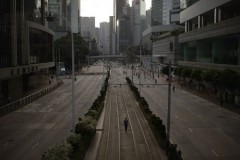 On the mainland, China has tight controls on the movement of all its citizens, both domestically and internationally, particularly those it views as troublesome.

Hong Kong citizens, who travel on passports issued by the "Special Administrative Region," enjoy freedom of movement. As part of this, they have either visa free, or visa on arrival access, to most countries that are enjoyed by a majority of Western nations.

The treatment dished out to Wong will be raising questions among Western diplomats and immigration officials about how long this can last for Hong Kong.

But the impact of the blossoming affair between the China and Thailand has observers concerned about how it will effect the region's dynamics.

Along with a new found enthusiasm to accede with Beijing's escalating requests for extradition of its citizens, Bangkok has actively sought investment from China — particular in long-delayed rail and road infrastructure projects.

It is perhaps no coincidence that this push has come as tourist numbers from China to Thailand have soared, wiping out the deficit from fading visitor numbers from Europe. Chinese tourists to the Thai kingdom were 7.9 million in 2015. This year it is expected to be around 10 million.

It was European travellers — particular from the cooler north of the continent — that were largely responsible for kick-starting an industry that economists now estimate accounts for about 20 percent of the nation's GDP via both direct and indirect receipts.

Bangkok, long Washington's closest ally in Southeast Asia, in a relationship that stretches back to the Vietnam War, has also signaled a closer military relationship with Beijing. This further reveals Thailand's notable shift toward Beijing and away from the U.S., considered its traditional ally.

How this historic relationship will fare in the mid to long-term will remain to be seen; much of it depending on Thailand's willingness to kowtow to Beijing's increasing demands.