Ricardo Santo Domingo spends 15 hours almost every day to embroider designs and patterns on a robe the Black Nazarene wears during the feast. (Photo by Rob Reyes)

For three months, Ricardo Santo Domingo, or Doc Ricky, spent 15 hours almost every day designing and embroidering and patterns on a vestment the Philippines' Black Nazarene was to wear during this year's feast.

"It had to be special," said Santo Domingo, who gives up much of his time as a dentist to make the intricate costume, adding that the difficult part was the design that would define the theme of this year's celebration.

"I can think of designs, but if He does not allow it, my hands seem to freeze," said Santo Domingo, claiming that that he had a "vision" of the vestment design when he prayed before the image of the Nazarene.

The icon is revered in the Philippines and is considered by many Filipino Catholics to be miraculous.

An annual procession to re-enact the image's transfer from a chapel in Manila to the church draws millions of devotees and lasts at least 20 hours.

"I ask Him wisdom and strength," said Santo Domingo when asked how he envisioned the design of the Nazarene's vestment.

The front of the robe shows images of Saints Peter and Paul with a monstrance "to represent Jesus and the Holy Eucharist" while the back has an image of the Sacred Heart of Jesus.

The vestment, which uses special threads made of 10-carat gold and silver strands costs about US$1,000.

Santo Domingo has been making vestments for the image for free for the past five years. "This is my way of thanking God for the life and love He has given me," he said. 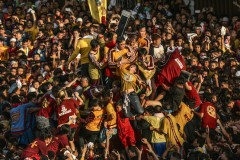 The doctor offers his skills in needlecraft as his "obligation as a Catholic and devotee."

He learned how to stitch from his mother who introduced him to Black Nazarene devotion when he was a child.

In 2013, he made his first Nazarene vestment, which opened up "opportunities" for the doctor. Devotees who have replicas of the image commissioned him to make vestments for them.

He also makes clothes and vestments for other religious images across the country. Gold and silver threads are used in making the vestment of the Black Nazarene. (Photo by Rob Reyes)

Manila Auxiliary Bishop Broderick Pabillo, however, said the vestment or the cost of it is not important.

"What's important are the things devotees want to do for the Black Nazarene," he said.

"The Black Nazarene does not need a luxurious vestment or an expensive robe. What matters is the dedication and the hard work we put in everything we offer to Him," added the prelate.

He said the Black Nazarene image symbolizes not only pain and suffering but also "simplicity and humility that Jesus Christ wants to teach us."

This year's celebration of the Nazarene's feast focuses on the "mission and service of the devotees."

Father Douglas Badong, a priest in the basilica that houses the image, said the feast aims to guide devotees to reflect on their "purpose as Christians and understand why they remain faithful to Christ."

He says he already has a vision of the design of the vestment he will make for next year's celebrations.