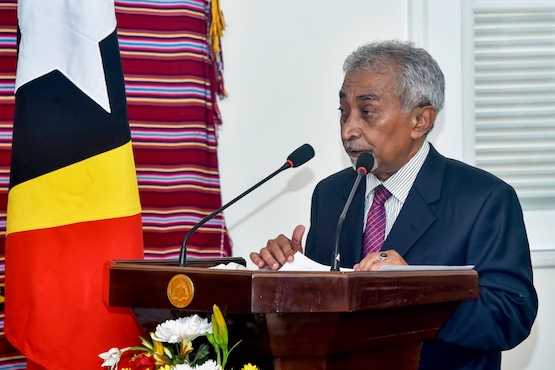 Prime Minister Mari Alkatiri delivers a speech after his swearing-in ceremony at the presidential palace in Dili on Sept. 15, 2017. (Photo by Valentino Dariell de Sousa/AFP)

Timorese democracy is in crisis. Tensions are high as some fear a return to the violence of 2006. But on the evening of Jan. 25, the day before President Francisco Guterres made his official announcement of the dissolution of parliament and the calling of early elections, Fretilin supporters were publicly celebrating what they saw as their victory.

But it was a victory that has come at considerable cost for the country's democratic process and has undermined the ability of its parliament to function as a transparent and proper forum for political debate.

Prime Minister Mari Alkatiri has famously announced in the past that he would rule Timor for 50 years and that democracy occurs not in parliament but in his party's central committee. The stubbornness of both Alkatiri and Guterres was central to bringing the country to violence in the 2006 crisis. Given their all-knowing belief in the righteousness of their policies, they appear willing to do anything to remain in power.

Over the past two months, faced with his inability to form a stable government and to get his program and budget passed by the deadline set out in the constitution (Art. 108(2)) and the regulations governing the operation of parliament (Art. 162), Alkatiri has openly colluded to ensure that a no confidence motion in his minority government could not be debated on the floor of parliament.

Portuguese academic Rui Fejo of the University of Coimbra has stated that until the minority government had its program and budget passed by parliament, it was only a caretaker government. But Alkatiri, renowned for his arrogance, appears to want to remain in power whatever the cost for the rule of law and democracy in Timor-Leste.

Faced with this situation, Alkatiri caused his party and the parliament's president (the equivalent of Australia's speaker) to breach the law that requires parliament to sit in a plenary session two days every week. By denying parliament its democratic and legal right to sit and debate, Alkatiri has set a dangerous precedent for the future of democracy in Timor-Leste.

If the vote of no confidence had been debated, there was no doubt it would have been passed with the support of the majority opposition (Art. 112 & 106 of the constitution). In that situation, the president would have had no choice but to dismiss Alkatiri and appoint the opposition in his place. In fact, it was open for the president to dismiss the government as early as Nov. 15 last year when it failed to get its program passed (Art. 86(g)).

Instead, by denying parliamentarians their lawful right to debate the motion, Alkatiri managed to hold out until Jan. 22 (Art. 100), which given he could not get his program or budget approved triggered the early elections announced by Guterres.

Many observers believe that Alkatiri himself drafted the president's order to call the election and handed it to the president weeks ago in a fait accompli, thus breaching the strict separation of powers entrenched in the constitution.

Furthermore, to many this has made the calling of the nation's Council of State to discuss the matter (Art. 86(f)) look like a sham. The president seems to have acted and already had made his decision at the behest of Alkatiri. This, along with the fact that Guterres is also president of the Fretilin party, has reinforced these views and led many to question his ability to make an impartial decision. There is at the very least an apparent conflict of interest about the way in which Guterres has acted in recent weeks.

Fretilin, which will now face a strong and united opposition, is widely expected to lose the coming election. It faces the dilemma of whether to stay with the old diaspora clique, which has brought the country's democracy to its knees on two occasions, or to try and rebuild itself with a new generation of home-grown leaders more in tune with the culture of the country.

Jose Belo is a journalist and commentator based in Dili.