Premier Hun Sen, now in his fourth decade in power, has led a sustained crackdown on dissent 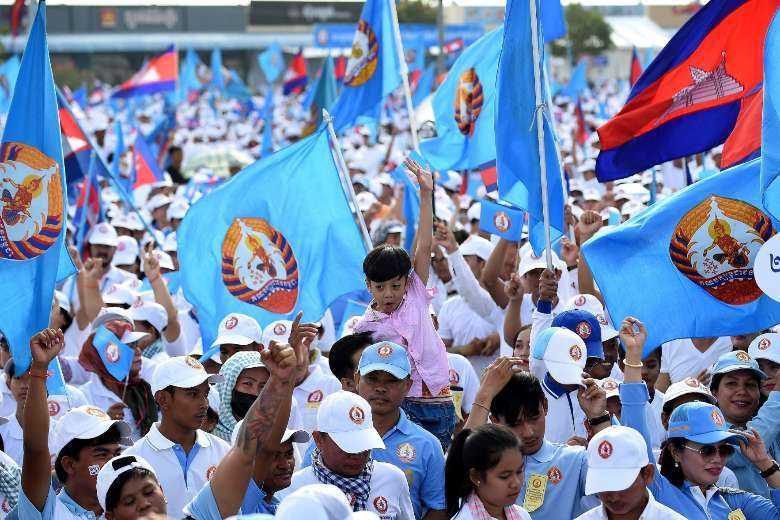 A boy reacts along with supporters of Cambodia's Prime Minister Hun Sen and the ruling Cambodian People's Party as they attend an election campaign rally in Phnom Penh in July 2018. (Photo: AFP)

Three decades after a landmark agreement ended years of bloody violence in Cambodia, its strongman ruler has crushed all opposition and is eyeing dynastic succession, shattering hopes for a democratic future.

The Paris Peace Agreements, signed on Oct. 23, 1991, brought an end to nearly two decades of savage slaughter that began with the Khmer Rouge's ascent to power in 1975.

The genocidal regime wiped out up to 2 million Cambodians through murder, starvation and overwork before a Vietnamese invasion toppled the communist Khmer Rouge but triggered a civil war.

The Paris accords paved the way for Cambodia's first democratic election in 1993 and effectively brought the Cold War in Asia to an end.

Aid from the West flowed and Cambodia became the poster child for post-conflict transition to democracy.

But the gains were short-lived and Premier Hun Sen, now in his fourth decade in power, has led a sustained crackdown on dissent.

Hun Sen has amassed vast fortunes for his family ... while almost 30 percent of Cambodians live barely above the poverty line

"We did a great job on bringing peace but blew it on democracy and human rights," said former Australian foreign minister Gareth Evans, one of the architects of the peace deal.

Evans said it was a mistake to agree to Hun Sen's demands for a power-sharing arrangement after the 1993 election.

"Hun Sen has amassed vast fortunes for his family ... while almost 30 percent of Cambodians live barely above the poverty line," he said.

Rights groups say the veteran strongman maintains his iron grip on the country through a mix of violence, politically motivated prosecutions and corruption.

Exiled opposition figurehead Sam Rainsy said the international community lacked the will in 1993 to stand up to Hun Sen, who had been installed as ruler by the Vietnamese in 1985.

"The West had a tendency to wait and see and look for imagined gradual improvements in governance. That clearly did not work," he told AFP.

"Cambodian politicians also have to accept some blame. Too many found it easier to accept a quiet but lucrative life in government than to say what they really thought."

Human Rights Watch said that under Hun Sen "even the patina of democracy and basic rights" has collapsed in recent years.

In 2017, the Supreme Court dissolved the main opposition, the Cambodia National Rescue Party.

And since the 2018 election — in which Hun Sen's party won every seat in parliament — the authorities have arrested scores of former opposition members and rights campaigners.

Around 150 opposition figures and activists are facing a mass trial for treason and incitement charges, while the main opposition leader Kem Sokha is facing a separate treason trial.

Covid-19 has seen more curbs, with over 700 people arrested according to the UN rights body, which has warned that most may not have had a fair trial.

In Cambodia, we don't have real democracy. People have no freedom to speak their opinion. When they speak out and criticize the government, they are arrested

The spokesman for the ruling Cambodian People's Party insisted it was the "will of the people" to have one party in parliament.

"We have peace, we have political stability, it reflects that we correctly implement the principles of democracy, and there is no abuse of human rights either," Sok Eysan told AFP.

There has been some international censure — the European Union withdrew preferential trade rates last year over rights abuses — but the pressure shows little sign of translating into change.

"The reality is Cambodia has become a wholly owned subsidiary of China, like Laos next door, and that means Hun Sen has been able to comfortably thumb his nose at any potential economic or political pressure from elsewhere," Evans said.

Speculation has simmered that the 69-year-old Hun Sen is grooming his eldest son Hun Manet — a four-star general educated in Britain and the United States — to take over the leadership one day.

But in March the veteran ruler said he would no longer set a date for his retirement, and activists have little hope that a change in leadership will bring a new direction.

"In Cambodia, we don't have real democracy," said Batt Raksmey, whose campaigner husband was jailed in May for allegedly inciting unrest after he raised environmental concerns about a lake on the edge of Phnom Penh.

"People have no freedom to speak their opinion. When they speak out and criticize the government, they are arrested."