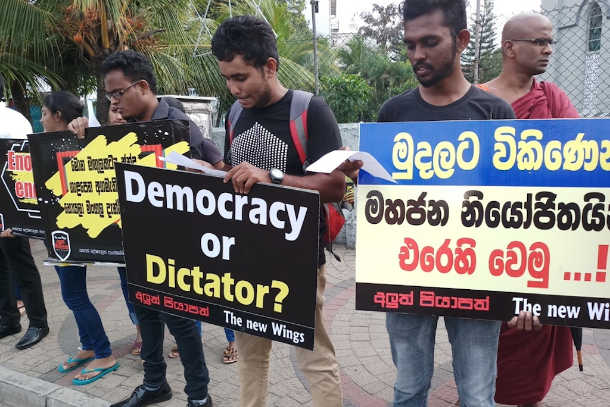 Members of civil rights groups, artists, journalists, and religious leaders join others at a protest calling for democracy at Lipton Circle in Colombo, Sri Lanka on Dec. 12. (Photo by Quintus Colombage/ucanews.com)

With Sri Lanka President Maithripala Sirisena vowing to appoint a new Cabinet on Dec. 17, civil rights groups, writers, artists, and journalists have taken to the streets to demand democracy be respected.

The country is reeling from a seven-week constitutional crisis sparked by his attempt to replace Prime Minister Ranil Wickremesinghe on Oct. 26.

The situation took a fresh turn this week as the protesters, who were dressed in black and sporting pro-democracy banners and posters, assembled at Lipton Circle in Colombo on Dec. 12.

Their demonstration came one day before the Supreme Court delivered its verdict stating that Sirisena's dissolution of parliament last month, and his attempt to hold a snap election two years ahead of schedule, was unconstitutional.

Dissolving parliament was seen as a last-ditch attempt to keep the man he nominated for prime minister, ex-president Mahinda Rajapaksa, in power.

This became necessary after Rajapaka was not able to raise a majority.

But on Dec. 13, a seven-judge bench ruled unanimously that the 225-member House could not be sacked until it was four-and-a-half years through its five-year term.

This has put Sirisena under intense pressure. Activists, who have called for cleaner politics, say they dread to think what his next move will be in this bizarre game of chess.

Some who spoke to ucanews.com said it was the duty of the president and elected representatives, the legislature, and the executive to listen to the same public that voted them into power.

"We have been forced to voice our concerns on the streets, as the president and some parliamentarians have violated the charter," said Brito Fernando, president of the Families of the Disappeared Organization.

"Not even the president is above the constitution," he said, surrounded by activists shouting pro-democracy slogans.

Wickremesinghe has always maintained his dismissal was in breach of the charter and refused to accept it. Like Rajapaksa, he said he would not surrender the post.

Now concern is growing about the ramifications of Sirisena's "illegal" power play on the economy, not to mention the damage being done to ethnic and religious harmony.

The United States has already suspended a US$400-million deal for infrastructure projects while international credit agencies have lowered their ratings for the country due to the political instability.

The president is not satisfied with the Supreme Court's verdict on Rajapaksa's appeal, Nishantha Muthuhettigamage, the deputy minister for ports and shipping, told dailymirror.lk.

"President Sirisena has confirmed he would be seeking a second opinion after the Supreme Court ruling with regard to Mahinda Rajapaksa's appeal against the interim order given by the Court of Appeal barring him and the Cabinet from functioning," Muthuhettigamage said.

He also said he would allow whichever party gains a majority in the House to govern the country, Muthuhettigamage added.

The legislature has passed at least two no-confidence motions against Rajapaksa, who served as a controversial but popular president at the end of Sri Lanka's 26-year civil war.

On the same day that the protesters marched in Colombo, parliament passed a vote of confidence in Wickremesinghe as prime minister.

"Whatever the Supreme Court says, we still have to campaign and fight for our rights," Fernando said before the verdict was announced.

He described politics in Sri Lanka as "big business."

"We have to struggle to build a more positive political culture where people's voices are actually heard," he noted.

The United Nations has called on the government to respect democratic values and constitutional provisions and process, uphold the rule of law, and ensure the safety and security of all Sri Lankans.

Religious leaders have also united in their calls to end the political crisis, while Jayathilaka Kammallaweera, one of Sri Lanka's leading short story writers, said the country's sovereignty must be safeguarded.

"We also oppose all media outlets that give 'generous' coverage to religious extremists. We stand for democracy," Kammallaweera said.