A disabled man is given a Covid-19 test by Sri Lankan health workers as others wait their turn in capital Colombo in January. (Photo: AFP)

Buddhist monks, Catholic priests, trade unionists and health experts are pressuring the Sri Lankan government to shut down the country for a week or two to prevent the rapid spread of the Covid-19 virus

Hospitals across the island nation are overflowing with coronavirus patients and the All Ceylon Medical Officers’ Association has warned that infected people may be left to die on the roads in a few weeks.

The association said it will be difficult to handle the worsening situation because the country has very limited health staff and facilities.

They urged Rajapaksa to close the country at least for a few weeks. “The health sector has pointed out the danger of the different coronavirus strains and the difficulty of controlling the rapid spread,” the chief prelates said.

The Association of Specialist Physicians said the spread of the Delta strain was impossible to control with vaccinations. “If the authorities do not make the right decisions at the right time, the situation will get worse,” its president Dr. Kumara Fernando warned.

If the government does not close the country by this Friday, the trade unions will

Father Cyril Gamini Fernando, parish priest of St. Anne’s Church in Kurana, Negombo, said: “The government is not sensitive to the plight of its people and is not listening to the experts on the Covid-19 situation. The country could slide into an abyss if it does not act in time.”

The Health Trade Union too has called for shutting down the country to save the public and health staff. “If the government does not close the country by this Friday [Aug. 20], the trade unions will,” it said.

Dr. Ramesh Pathirana, a minister and co-cabinet spokesman, said the government has already imposed some travel restrictions even though the country is going through a severe economic crisis.

Trade associations in several cities across the country have already closed shops while religious places, schools, colleges, universities and tuition classes have also been shut. 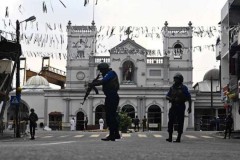 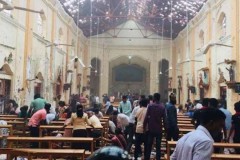 The mayor of Colombo Municipal Council has urged people not to visit the capital city except for urgent matters and to stay at home as much as possible.