Politicians find anti-Muslim hate the easiest way to keep crowds of Hindus cheering, and the casualty is secularism 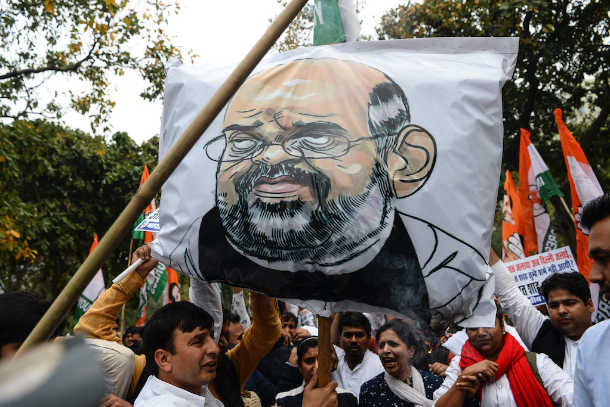 The Delhi riots of Feb. 23-27 provide harrowingly detailed narratives of the horrors of what Hindu sectarian politics has done to India, the world's largest democracy, over the last seven decades.

After the riots in individual pockets of the capital, one could find Hindus and Muslims sharing food, echoing sentiments of brotherhood and harmony. But as one steps into northeast Delhi, the hub of the riots, the ugly face of the Hindu-Muslim divide is palpable. Even on Feb. 29, when police said the riots were over, mobs were still shouting "Hinduon ka Hindustan" (India belongs to Hindus). In a violence-hit area, a Hindu shopkeeper was more vocal. "They have seen Hindus are not meek," he said. The riots provided a new but controversial slogan: "Desh ke gaddaro ko, Goli Maro salon ko" (Shoot down the traitors of the nation). The word "traitor" has somehow become synonymous with people who publicly oppose the idea of a Hindu nation and policies geared to that end. By extension, it came to mean Muslims. The slogan, publicly and brazenly, is a call to shoot down Muslims.The Delhi riots have some ironic links to the February 2002 riots in Gujarat which killed some 2,000 people, mostly Muslims. Comparatively, the 46 deaths in Delhi could be regarded as insignificant, but the recent violence shows the definitive and advancing march toward a Hindu nation, a journey that began to take graphic shape 18 years ago in Gujarat.Both riots happened at the end of February, barely 10 days away from Holi, the major Hindu festival of color in northern India. Coincidence, maybe. In both cases, police failed and faced allegations of complacency, and even of aiding the rioters.In 2002, Narendra Modi was chief minister of Gujarat. In 2020, he wields power in New Delhi as prime minister of India. In 2005, Modi was denied a US visa after Washington held him responsible for the Gujarat mayhem. In 2020, as part of the city was burning, Modi was shaking hands with Donald Trump as the US president was ending his 36-hour maiden tour of India. Trump lauded Modi as a man working for "religious freedom" but refused to comment on the riots, saying it was "an internal matter of India." What was regarded as religious persecution 18 years ago has now become an act of religious freedom!That exemplifies the march of the Hindu-nation ideology, which was once regarded as an embarrassment even to utter publicly. No one now condemns the call to make India a Hindu nation, and those who dare run the risk of being branded as traitors or beaten to death on the street.

Historically, Muslims are seen as those who supported the idea of partition of British India in 1947 to create a Muslim nation of Pakistan for themselves. Since Muslims have Pakistan, let Hindus have India; that is the logic politicians have injected in the minds of masses for votes. But it is also a fact that a large number of Muslims stayed back, meaning India houses more Muslims (180 million) than Pakistan (170 million) today.Politics in India revolves around majoritarianism, which is different from an electoral majority and is wedded to placating the sentiments of the Hindu majority. Politicians find anti-Muslim hate the easiest method to keep crowds of Hindus cheering. The biggest casualty, then, is secularism, cherished by most Indians for centuries.Opposition Congress party lawmaker Shashi Tharoor, a former UN diplomat, told parliament last month: "In 1947, we had a partition of Indian soil, and in 2020 this government [under Modi] is giving us a partition of Indian soul."Politicians like Tharoor blame Modi's Bharatiya Janata Party (BJP) and various other Hindu hardline organizations for hate speeches and the riots. BJP leaders face severe allegations of hate speeches in the run-up to the Delhi riots.Indian politics has always been guided by the official recognition of voters' identity based on religion, caste and even languages. The hate game has brought rich dividends for the BJP across India since 2014 when it won a landslide in federal elections and Modi became prime minister for the first time. The party was able to expand its base even in new geographical areas like Christian-dominated northeastern states and win over new communities.

With the BJP's electoral triumph in 2014, the Hindu groups who support the BJP became emboldened. Under state patronage, they began vigilantism to protect what they claimed as Hindu values. That would mean, for instance, militia groups patrolling highways and attacking Muslims accused of taking cows, their revered animal, to slaughterhouses.

Such violence prevailed more in BJP-ruled states where Hindu groups have also targeted Christians, accusing them of conversion and cultural pollution.The Delhi riots show the strength and growth of an idea — once considered fringe and shameful — and its movement to the center stage of a nation with respectability. Look closely and we see how hate alone is the investment for such a development. That selective, religion-based violence should terrify any human being. Police constables on the streets admit there have been instances of targeted violence. In one locality, a policeman said, more than 70 houses were set ablaze but five Hindu houses, including one belonging to a police officer, were spared."The violence has a pattern ... target the Muslims," agrees Jahanara, a Muslim woman.

"Without the spirit to settle scores, no mob can burn vehicles and buildings. They were also prepared, and hence the impact was more intense," says another police constable on condition of anonymity.

The riots in New Delhi with their explicit anti-Muslim slogan were an assertion that India belongs to Hindus. That was an idea a fringe Hindu group raised seven decades ago but that was rejected by national leaders as an abomination.

With the ruling party members now shouting slogans to shoot down Muslims as they march through the heart of New Delhi holding the national flag, helped by the police and administration, the march toward a Hindu nation has crossed a critical milestone.

Nirendra Dev is a senior journalist based in New Delhi. The views expressed in this article are those of the author and do not necessarily reflect the official editorial position of UCA News.