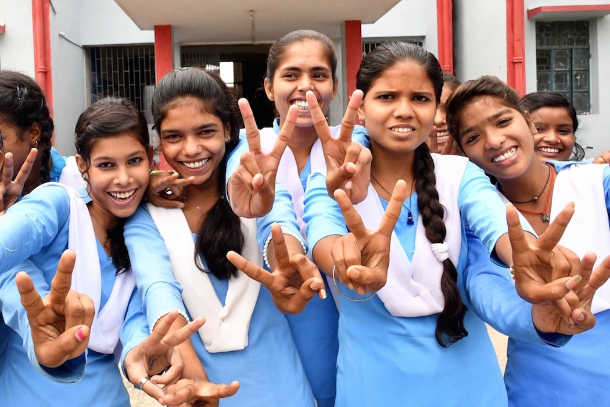 Students make victory signs after their grade 10 results are declared in Patna, the capital of India's Bihar state, on June 26. Delhi launched a new program on July 2 to make education a more enjoyable experience amid reports of increasing student suicides. (Photo by IANS)

The Dalai Lama, Tibet's spiritual leader, helped to launch a new "happiness curriculum" at schools in the Indian capital on July 2 as a mental health crisis looms along with a recent spike in student suicides.

The state government in Delhi has made the curriculum mandatory at all of its schools, with meditation, lessons on moral values and other mental exercises now firmly entrenched.

From this academic year, which starts in July, the reformulated study schedule will be taught to 800,000 students in Delhi's state-run schools from nursery up to eighth grade.

Data shows 25 students commit suicide every day in India. The number hit 8,934 in 2015, according to statistics from the National Crimes Records Bureau, and climbed to 9,474 the following year — or more than one self-inflicted student death an hour.

Studies show the major cause is anxiety fed by parents' high expectations and less-than-desirable grades. But discrimination based on race, sex or religion, body-shaming, sexual challenges and emotional issues such as low self-esteem are also said to be contributing factors.

Delhi's state education minister, Manish Sisodia, masterminded the curriculum. He said the goal is to build a generation less likely to involve itself in violence and corruption.

"It is our belief that modern-day problems like terrorism, corruption and pollution can be solved through schools and a human-centric education," Sisodia said at the program launch.

The curriculum, designed by a group of 40 experts, suggests starting each 45-minute class with five minutes of meditation.

The Dalai Lama told listeners at the function that only India "has the ability to combine modern education with ancient knowledge."

He expressed hope the new schedule would help students address negative emotions such as anger, hatred and jealousy.

An official from the Catholic Church, which manages the largest network of private schools in the country, welcomed the move.

"Joyful learning is the key. We can overcome all of the issues with that," said Father Joseph Manipadam, secretary of the Indian Bishops' Office.

He coordinates a network of 50,000 Catholic educational institutions, including 400 colleges, six universities and six medical schools.

"In India, students are overburdened with academic and examination-related pressure," he said, adding church-run schools have already made efforts to make education a more joyful experience.

Sheila Rao, who has been working as a counselor at St. Paul's School in Delhi for 28 years, said schools have only begun speaking about mental health issues in the past decade.

"Each student is a unique individual. Their problems must be addressed in different ways," Rao said, adding there is a tendency to generalize such problems.

She said parents and teachers must both be brought on board for the new measure to be successful.