The Constitutional Court on Wednesday held its first hearing of a legal challenge from former general Prabowo Subianto against the results of last month’s presidential elections won by Joko Widodo.

They also claimed millions of votes were invalid due to irregularities at more than 55,000 polling stations in eight provinces including Jakarta, East Java, West Papua and all 14 districts in Papua. 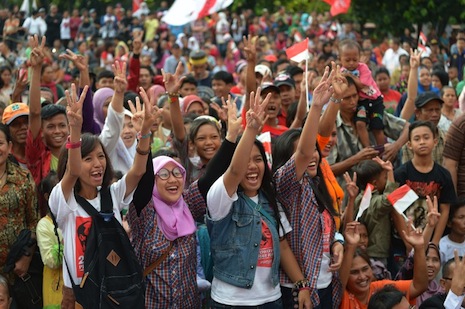 Legal documents provided to the court pointed to systematic and massive violations of the election process, and the KPU’s failure to meet recommendations of the Election Monitoring Body in some provinces.

However, Wednesday's hearing lasted only a few hours and ended with the nine-judge panel ordering Prabowo's team to revise their documents and resubmit them the following day.

They cited inconsistencies between what his lawyers said in court and the evidence presented in the documents.

Judge Wahiduddin Adams said during the hearing that the court “found many grounds [of Prabowo’s legal documents] which have no proofs”.

Prabowo had presented the hearing with a highly charged opening statement. “The core of democracy is the people’s sovereignty,” he said.

“People have the power, and this power is materialized in the election. Thus, the election process is truly the core of democracy.” The process itself is key, he said, both “before and after the election. Before the election, the issue of voters lists is crucial.”

Prabowo claimed he received zero votes in hundreds of polling stations in some parts of the country. “The other candidate won 100 percent [of the votes]. It only happens in a totalitarian, fascistic or communist state. It doesn’t even happen in North Korea.”

He said that while some had recommended that he should abandon his legal challenge, “we respect the system we’ve built … I show my commitment to democracy. I highly uphold the constitution.”

Constitutional law expert Refly Harun believes Prabowo has only a slim chance of winning. “They have arguments of structured violations. But [they] don’t explain it,” he told ucanews.com. “They made presumptions then claimed the victory based on their own calculation.”

He added that the alleged violations regarding the voter lists could be simply procedural in nature. “It can be seen as an administrative error instead of a structured violation.”

Security was tight, with hundreds of riot police guarding the court and water cannons on standby in case the situation got out of hand.

With the next hearing set for Friday, the session is expected to take about 14 days. The final decision may be announced on August 21.