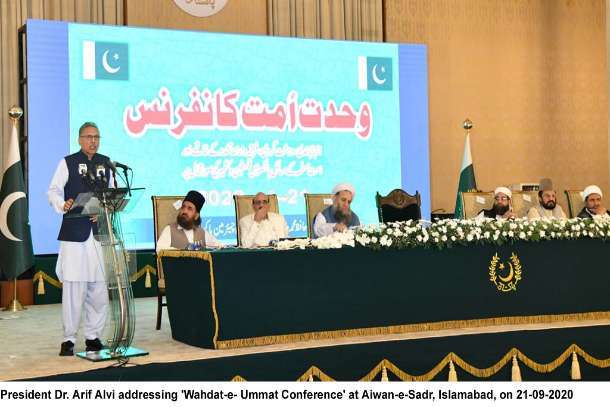 The government of Pakistan and top Muslim leaders have pledged to protect the worship places, sacred sites and life and property of religious minorities.

“Since besides Muslims, non-Muslims also reside in Pakistan, as per Islamic Sharia, the protection of their worship places, sacred sites as well as life and property is also the duty of Muslims and the government. Therefore, those indulging in disrespect for worship places of non-Muslims, their sacred places and life and property should be dealt with sternly by the government,” said a joint declaration issued on Sept. 21 after the conclusion of a day-long conference hosted by President Arif Alvi in Islamabad.

Several Sunni and Shia figures were in attendance.

This came after days of protests by hardline Sunni groups who called for a complete boycott of Shia Muslims and a ban on Muharram processions.

In addition, dozens of cases were also registered against members of the minority Muslim sect across Pakistan under the draconian blasphemy laws on charges of insulting the Prophet Muhammad’s companions, some of whom are criticized by Shias for their role in the seventh-century killing of Shia Imam Hussain and his close relatives at the Battle of Karbala.

The protests, held in Karachi and Islamabad, saw tens of thousands of Sunni Muslims chanting anti-Shia slogans in the presence of police and other law enforcement agencies.

“The Human Rights Commission of Pakistan is gravely concerned at the recent surge in blasphemy cases being registered against sectarian and religious minorities, particularly the Shia community, and the potential for ensuing sectarian violence,” the rights body said.

“HRCP believes that the state has effectively abdicated its responsibilities under international human rights law by leaving those accused of blasphemy to the mercy of mobs or trials that are marred by glaring legal and procedural flaws. It is well established that in most cases those accused of blasphemy are eventually acquitted on appeal, but often after protracted periods in custody and trials that risk the lives of the accused, their lawyers and judges at the hands of organised far-right groups.” The commission demanded that the state uphold all citizens’ right to freedom of religion or belief.

“The police must also refrain from registering blasphemy cases so promptly, knowing full well the sensitive implications of doing so when such complaints are often fabricated and spurred on by personal vendettas,” it added.

The joint declaration described acts of terrorism, extremism, sectarian violence and murders in the name of religion as “anti-Islam.”

No speaker or preacher will indulge in the disrespect or blasphemy of prophets, and those who do will be proceeded against under the law, it said.

There should not be any publication and distribution of books, pamphlets and writings which promote hatred and hurt religious sentiments. Cassettes and websites based on provocative and hate material should be completely banned. Provocative slogans which promote hatred and hurt sentiments would be completed desisted, and Aima, Fiqh and Mujtahideen should be respected, the declaration said.

A joint public meeting will be held to express solidarity.

The government should also implement the National Action Plan against terrorism and extremism without any discrimination.

Elements involved in the disrespect of sacred personalities during or before Muharram-ul-Haram should be proceeded against immediately and the culprits be punished soon, the statement said.