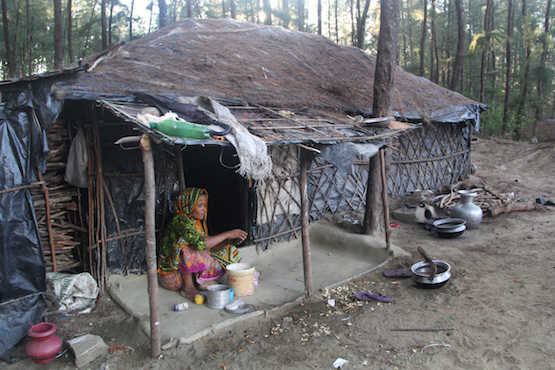 A Rohingya woman is seen in her hut in the Shamlapur makeshift camp for undocumented refugees in Cox's Bazar district in this file photo. (ucanews.com photo)

At 83, Abul Kashem is one of the oldest residents among 25,000 Muslim Rohingya refugees at Leda camp in the Cox's Bazar coastal district of Bangladesh.

The camp has been home for Kashem's family since 1991, when they left Myanmar's Rakhine State following years of persecution and death threats from Buddhists.

Kashem, a father of eight, told ucanews.com that Rakhine Buddhists had wanted to kill them.

"So we fled," he said. "They looted and grabbed our home and properties after we left."

His clan and family, over many years, had land disputes with members of the Buddhist community that left 13 Rohingya, and three of their enemies, dead.

For decades, Rohingya have entered Bangladesh from Rakhine State to escape violence.

In 1991, the office of the United Nations High Commissioner for Refugees documented about 30,000 refugees and put them into two camps in the Cox's Bazar area.

However, Bangladesh subsequently stopped the registration process, fearing it would encourage a further Rohingya influx.

Already in Bangladesh, many like Kashem were denied refugee status and a place to live. So, they set up half-a-dozen makeshift settlements such as Leda, in close proximity to the official camps.

The inflow of refugees

According to the UNHCR, Bangladesh is currently home to about 276,000 Myanmar refugees. Bangladesh says the real figure is more like half a million.

Bangladesh has taken a tougher stance against Rohingya since 2012. It has sought to seal-off border crossing points, pushed away boatloads of fleeing Rohingyas and banned three aid agencies from operating among unregistered refugees.

The government says Bangladesh doesn't have the capacity to accommodate Rohingya and is not obliged to do so because it is not a signatory to the 1951 UN Refugee Convention.

In January, the government floated a plan to relocate all refugees to a flood-prone, uninhabited island, sparking uproar from rights' groups.

Amid movement restrictions and a lack of livelihood, undocumented refugees like Kashem had to find their own ways of surviving.

"I have worked as a fisherman and laborer," he said.

Kashem refused offers from criminal gangs to engage in drug and human trafficking, concluding that to do so would have been disastrous for his family.

Their own community disliked the few refugees who got involved in crime, he added. Asia Timesreported that the group was allegedly getting foreign funding to step up a Rohingya revolt in Rakhine State.

The killing of the border police triggered a deadly crackdown by the Myanmar military, leading to hundreds of deaths, rapes and mass displacement of Rohingya.

On June 15, Bangladesh's foreign minister, A.H. Mahmood Ali, referred to a series of arrests of Rohingya for alleged drug peddling, human trafficking and violence including murder. He said such activities, together with arms smuggling, posed a serious threat to national security.

The comments coincided with a report from the Jakarta-based Institute for Policy Analysis of Conflict suggesting that Rohingya militants might embolden Bangladeshi extremists.

Ties between extremists in Bangladesh and Southeast Asian countries were growing because of Islamic State's presence in the region, as well as population movements by students, migrant workers and refugees, the report added.

Rohingyas were a peace-loving people, but their hearts might have hardened due to decades of persecution, he added.

'All should not suffer for blunder of a few'

Father Albert T. Rozario, convener of the Justice and Peace Commission in Dhaka Archdiocese, says Rohingya should not suffer because of the "blunders" of a few.

"Rohingya are stateless and persecuted for their ethnicity and faith," he said.

"We are sympathetic toward them, but we feel anxious when we come to know about Rohingya getting involved in crimes and militancy because it complicates the problem further."

However, that did not mean the whole community should pay a price.

Father Rozario said the international community must continue pressing for an acceptable solution.

Syed Imtiaz Ahmed, from the International Relations Department at Dhaka University, said it was "unrealistic" to generalize about Rohingya posing a security threat.

Criminals and militants could use some Rohingya as "chess pawns," but aggressive actions were not the community's priority.

"Rohingya want to live, but militants want to die," Ahmed said, adding that most simply wanted a life of happiness and peace, things they have never had.

Phil Robertson, from Human Rights Watch, said it was hard to see how poor and desperate refugees posed a 'security threat' to Bangladesh.

He added that by refusing Rohingyas refugee status, the government of Bangladesh was making the situation worse.

"The reality is the foreign minister is trying to ring the 'terrorist' alarm bell in the hope that the international community will agree with his government's crazy scheme to move the Rohingya to isolated, uninhabitable coastal islands or push them back to Myanmar," he added.