Typhoon Rai has ravaged the southern and central regions of the country causing 300,000 people to flee homes, resorts 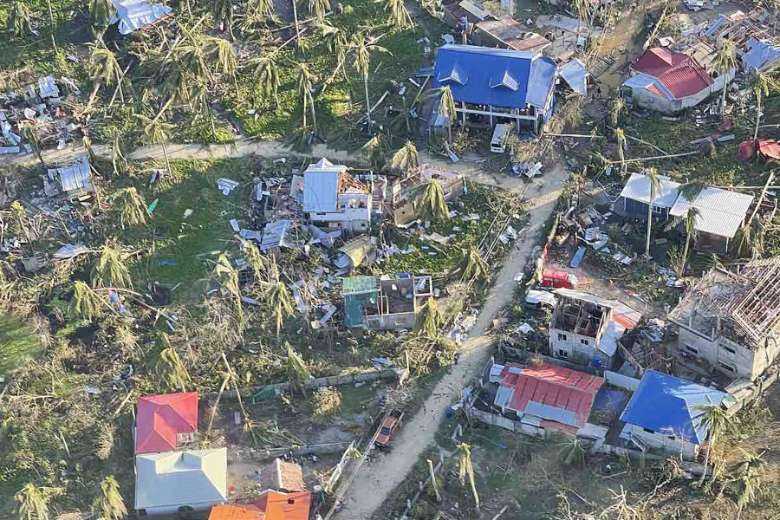 An aerial handout photo from the Philippine Army shows the destruction caused by Super Typhoon Rai after the storm crossed over General Luna, Siargao Island, on Dec. 17 (Photo: AFP)

The death toll from the strongest typhoon to hit the Philippines this year has risen to 18 as the disaster agency warned on Dec. 18 of "severe damage" in the hardest-hit areas.

More than 300,000 people fled their homes and beachfront resorts as Typhoon Rai ravaged the southern and central regions of the country, knocking out communications in many areas and toppling concrete power poles.

Rai was a super typhoon when it smashed into the popular tourist island of Siargao on Thursday, packing maximum sustained winds of 195 kilometres per hour (120 miles per hour).

Its wind speeds eased to 150 kph as it barrelled across the archipelago, ripping roofs off houses, uprooting trees and littering streets with debris.

"There has been severe damage" in Surigao and Siargao, Timbal said, referring to the areas that bore the brunt of the typhoon.

Communications were still down in Siargao and in the nearby city of Surigao, which is on the northern tip of the southern island of Mindanao.

That takes the overall death toll to 18, with the disaster agency also reporting seven missing and two injured.

"Odette was so strong," Demerey said, using the local name for the typhoon.

Residents "are trying to repair their houses because even our evacuation centers were torn down. They can't seek refuge anywhere else... everything was destroyed."

After lashing Palawan island, Rai emerged over the South China Sea on Saturday and was headed towards Vietnam, the state weather forecaster said.

Rai hit the Philippines late in the typhoon season -- most cyclones typically develop between July and October.

Scientists have long warned that typhoons are becoming more powerful and strengthening more rapidly as the world becomes warmer because of human-driven climate change.

The Philippines -- ranked as one of the world's most vulnerable countries to the impacts of climate change -- is hit by an average of 20 storms and typhoons every year, which typically wipe out harvests, homes and infrastructure in already impoverished areas.